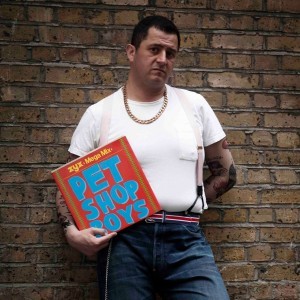 If you want proof that character comedy is both alive and well and a whole lot more sophisticated than a half-talented stand up belming around and being mildly racist in charity shop spectacles*, please, please, please get down to the Black Heart in Camden and see Jamie Glassman's Tony Izzet and Friends. Please do this. Please, please do this thing.

Glassman is a character comedian, but come back, slow down, chill out: he's an amazing one. He plays a cabbie and a confused racist and a Buddhist stand-up and an estate agent and himself, variously, interspersed with skits projected in the background while Glassman hurriedly changes. They are all amazing, they are all great. There's very little else to say.

It's hard to be good at character comedy. It's hard to know when to stop and pack one character away and start out on a new one. It's hard not to break character. It's hard to maintain an absurd Australian accent for as long as he does. But Glassman manages it, and with aplomb. As a writer and co-producer he has won awards for his work on Ali G and Borat, and as a performer he's even better. Go and see it

*read the author's digression on the state of character comedy here:

Because character comedy is kind of in a pit at the moment. Remember five years ago, when everyone was all "SHAT AP!" and "want that one!" and "glass of white wine for the lady!" and "this show is well good!"? It was kind of… it was kind of really terrible, wasn't it? It was kind of the most awful thing that ever happened.