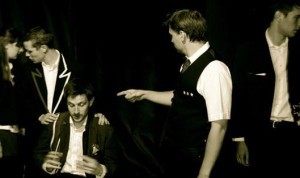 If you've spent enough time on the internet, you've probably heard of The Unexpected Items. They're the Gap Yah people.

Their new sketch show is billed as "Olympic themed" but it isn't so much about the Olympics as it is the media circus surrounding it on all sides. What this means is: there's a lot of 'format' parodies scattered through with a few straight sketches, and all of it is about as silly as it needs to be given the incredibly-silly-when-you-think-about-it subject matter.

The first OlymPIC and Mix show is unpolished, feeling almost half-finished but undeniably charming in its haphazard-ness. The chemistry between the players is the show's strongest point, and they manage to work around current developments (or at least, developments from after this show was written) such as a disappointing lack of tourists with a willingness to break both character and fourth wall, which works well in a small venue.

There are also three interstitial stand-up acts if sketches aren't your thing (although, really, if it isn't, why did you buy the ticket?): Gay Best's character comedy is certainly watchable even if it wears thin pretty quickly; musical comic Steven Seller manages to balance bitterness and crowd-pleasing awesomeness; Newsjack contributor Nick Purves's tenuously-connected string of anecdotes is good but misplaced.

Overall, it's good. It's a good show. But it would be irresponsible not to warn you that it is hot up in the Hen and Chickens Theatre. There's no encore. You can high-tail it out of there as soon as it's done. The Unexpected Items won't be far behind you.

The OlymPIC and Mix show runs until 4 August at the Hen and Chickens Theatre Bar, Highbury Corner. Show starts at 7.30pm, tickets £8.