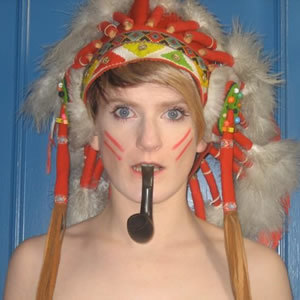 There's a 12-year-old child in the audience.

Normally, this wouldn't be worth a comment in a short-ish comedy review, maybe if this was a tabloid piece about the decline of morals in parenting, taking your kid to a comedy show above a pub at 6.30 in the evening, but here we are: there's a 12-year-old child in the audience, and the room is too small to just gloss over that fact, so Sarah Campbell is going to have to work around it. She doesn't work around it; she incorporates the appearance of the 12-year-old child into her performance wonderfully, just by consciously editing the material on the trot and calling attention to it in a way that slots into her loose, slightly awkward persona.

Experiments in Fun is, at this point, very much a work in progress: essentially it's a series of anecdotes about things that are supposed to be fun but aren't, and things that aren't supposed to be fun but which Campbell thinks are fun anyway. While the subject matter — hen parties, festivals, spa treatments — aren't breaking any new ground, it's the delivery that sells it. Toeing a broad line between unwarranted grumpiness and absolute discomfort, Campbell delivers the whole thing with an infectious glee even when that's not entirely appropriate to the tone.

Basically: it's funny. With the rise of Facebook et al, most of us have a touch of the "fear of missing out", and Sarah Campbell has made that very modern fear into a solid hour's worth of material. Maybe more. We only got through the first half. We can't speak for the second half, nor can we promise the 12-year-old will make an appearance. But you'll never know unless you go along.

Sarah Campbell: Experiments in Fun is on at the Camden Head, 100 Camden High Street, until Sunday 19 August, 6.30pm, tickets £5. For more information and to book see the Camden Fringe website.