Comedy Review: Not The Adventures Of Moleman @ Camden Fringe

By Londonist Last edited 105 months ago
Londonist Comedy Review: Not The Adventures Of Moleman @ Camden Fringe 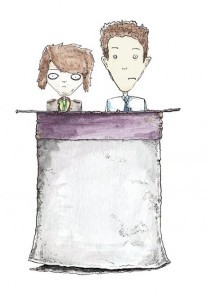 Not the Adventures of Moleman seem like perfectly nice guys. Keep that in mind for the rest of this review: whatever is said here, they certainly enjoy what they do and put in an enthusiastic performance even after at least a year's worth of doing this show.

It's a shame, then, that the show is an hour's worth of variations on the same joke — they start a sketch, and something goes wrong with it. Okay, that's a formula, technically speaking, and whether it works for you will depend on whether you enjoy that sort of thing, the irritatingly "meta" material born from a lack of confidence.

The thing is, the material is probably fine. There are solid jokes in there, somewhere, but either drawn out far too long or hidden behind all these self-aware asides that probably seemed tongue-in-cheek at the time. While it's okay to draw attention to the mechanics of a low-budget stage show – actually, when things go wrong for real, that's when Moleman really shine – sort-of moaning about the size of the audience just seems self-pitying.

Aaron and Dicky's cheeriness and a couple of game audience members rescue the Not the Adventures of Moleman from total pointlessness, but there are probably much better shows to watch for an hour.

Not the Adventures of Moleman is at the Etcetera Theatre until Sunday 5 August, tickets £6. Camden Fringe runs until 26 August.