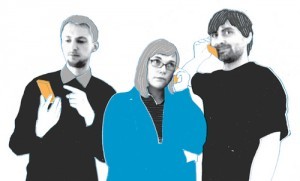 Writing a review is hard. It is a complicated process. Like spinning plates while fixing a complicated antique pocketwatch, all cogs and coils, at the same time. We're sure you sympathise. "Oh," you think. "It must be just ever so difficult to sit in an air conditioned room and watch comedy shows for free." It is, yes. "Those 300 words must be so hard to come by," you also think. They are, yes. But come, take a peek behind the curtain, as we embark on:

Last night your correspondent went to the Etcetera Theatre in Camden and watched a sketch troupe called Making Faces. There is normally not any point in mentioning any fine details of the venue over the course of a review, and this is in no way different at all. Stairs, you know. Beer on the floor. It is a venue. You get the drift.

Some reviewers - professional reviewers - make notes throughout, with a paper and pen. They are what your correspondent refers to as 'terrible nerds'. Here are the notes taken from last night, transposed in full from an iPhone:

"Seven of the people in the audience are blatantly the parents of the three people on the stage".

No, that doesn't add up. That is one of the many challenges facing the reviewer. Here is a further note, which we do not understand:

It is possible we are not prepared to write a review.

AND SO TO THE REVIEW

Making Faces are a SKETCH TROUPE made up of THREE PEOPLE who seem to share SEVEN PARENTS. NONE OF THEM ARE BLUE PETER PRESENTERS. They played a COMEDY SHOW last night at the ETCETERA THEATRE.

In short, they were very good. Honestly, they were great. Making Faces came with the kind of introductory blurb that normally makes some people (and we are not naming any names but it rhymes with 'the person writing the… bluh-voo') roll their eyes so hard they need to go to hospital: 'Sketches! Poetry! Songs!' Is there anything worse than a comedian who breaks into song or verse in the middle of a show? Yes: a jaded reviewer.

The Main Thing with the three faces of Making Faces — that's Lizzie Kevan, the lady-face; Ed Mayhew, the poetry-face; and Dan Curtis, the funny-face — is their natural, easy-going chemistry. Troupes on the Fringe seem to find it hard to toe that fine line between over-rehearsed and maintaining the natural, sometimes chaotic chemistry that makes them funny, a line Making Faces navigate with aplomb. And they should, really: they regularly host and perform in comedy nights across the capital which on the basis of this show you need to get down to pronto.

THE POINT WHERE, 450 WORDS IN, WE REALISE WE HAVE NOT PRAISED NOR INDEED MENTIONED THE PERFORMANCE ITSELF

Making Faces' comedy sketches are great. Like, cry-with-laughter great. You know when Les Dawson used to play the piano, gurning like an old lady, then occasionally hit a bum note to peels of laughter? Dan Curtis is like that on roller skates. His honed, practised pratfalling marries perfectly with the more poker-straight stylings of the other two faces, but that doesn't mean they haven't their own comedy worth: the three blend brilliantly together on stage.

But the elephants in the room are the poetry and the songs. What is there to say: in a room occupied by Making Faces, both are great. Poetry-face Ed Mayhew's verse is always accompanied by laughs or ends on a punchline, while the songs are just few-and-far-between enough to not be annoying, and most are peppered with big old gags. As a whole, the Calm and Collected hour is really, really good.

IN WHICH WE DON'T KNOW HOW TO FINISH THE REVIEW

Making Faces are FUNNY, go and SEE THEM.