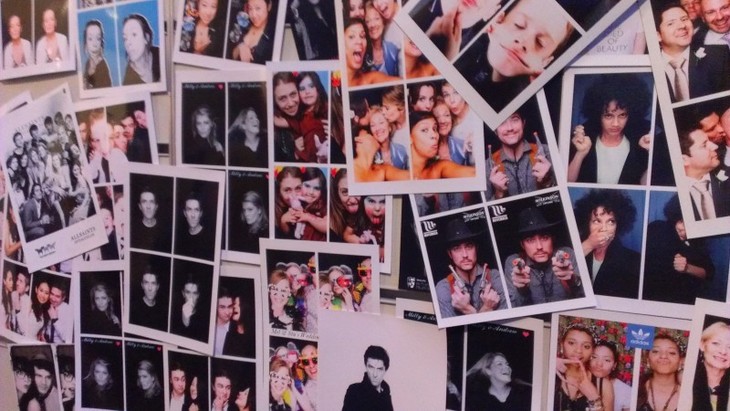 Getting passport photos in stuffy booths in the Post Office has lost all its fun since they became digital. There’s no opportunity to have three serious photos and a final silly face to relieve the tension since it became one shot for all.  The cigar advert from the 80s is redundant.

Just off the the cobbled streets behind Columbia Road, the Photobooth Festival attempts to reclaim the booth’s glory days with a range of eight unique handcrafted booths, which allow you pull all the faces you’ve ever wanted to over four instantly accessible shots, and you can bring a mate in too.

In all honesty, it sounded a bit dubious: a few novelty booths in a room with wacky vintage effects, exactly how exciting can it be? We’ve all got Instagram, yeah? Well, after attending a preview, we can declare it unbelievably mega-double-wow exciting.

You’re greeted by the Powder Puff Girls providing makeovers, ready for your close up in a glittery spangly booth. We didn’t take this up; we didn’t want to spoil our complexion. But there was no stopping us getting dressed up in wigs and sun visors for the disco booth, pumping out the Bee Gees like a hen-do karaoke night.

At the back there’s an Airstream caravan with a wind machine providing subtle black and white photographs and, of course, a pop-art booth for your own Andy Warhol snaps. You even get to go swimming with the fishes, in a non-mobster purely underwater way, before frolicking on a beach with a live photographer.

If you’ve ever had to endure family holidays in a windswept caravan, miles from culture, with a transistor radio and a deck of cards with a king missing – or is that just us – you can rekindle the memories in the caravan booth, which even has a little picket fence. And, if you’re lucky, a little space man might come and say hello.

It being a family event they have the littlest booth in the world for the wee kiddies, and yes you can fit two adults in it, just about. It’s best to make sure you know them well though, it gets pretty cosy in there.

The whole event surpasses expectations with adults grinning Alice In Wonderland smiles and children careering around with unbounded joy.

The top tip, however, is booze. The first photos will be quite uncomfortable and rigid (we are Brits) but neck some wine and you’ll soon be gurning closely into the camera and giving your friend sneaky rabbit ears.

Unfortunately there is only one ladies toilet and it gets rather crowded between the booths, but the jostling crowds means you can laugh at everyone else’s photos over their shoulders.

The Photobooth Festival is only on for one day, today, but if you’re in the Columbia Road area then head down there now. The photos probably wouldn’t get you past any border checks, but when there’s this kind of fun to be had, why would we want to leave London.  Lets hope Boothnation host another one soon.

Photography by David Newbury and some photobooths.