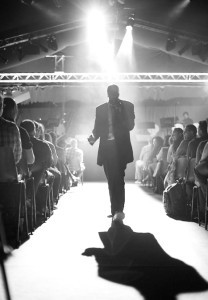 There comes a time in artists lives when the trade which brought them success and fame simply isn’t good enough. While Paul Heaton could reform The Beautiful South, tour the country and bag a headline festival slot or two, his suburban tales are of a time past.

Instead Heaton has followed Damon Albarn and ventured into the world of theatrical music. Yet, while Albarn’s Dr Dee chose an obscure polymath as its muse, Heaton exploits his ability to tap into the everyday by examining the core of our moralistic DNA: Sin.

The 8th is a theatrical pop-opera journey through the seven deadly sins, and introduces the mysterious 8th sin. It’s narrated with the fire and brimstone evangelising  of the deep south by The Wire’s Reg E Carthy; his wrathful assault sound-tracked by a constantly evolving score.

Each sin is represented by a different masked singer, giving The 8th a vocalised respite from Che Walker's apoplectic narrative about an impassive murder. Tonight these include Beautiful South singer Jacqui Abbot as Envy, Los Camposinos’ Garath David as Gluttony, and Greed portrayed by the vocal wonders of Simon Aldred — aka Cherry Ghost.

As the convoluted narrative unfurls, each vocalist rises from the seated arc on stage to deliver their sermon from a central pedestal. Gluttony is a jaunty pop number and sloth a soulful stomp. Heaton himself is only visible as gossip is revealed as the eighth sin is revealed as gossip.

Unfortunately the disparity in the evolving music, and the regimented order between narrative and song is more akin to low brow musical, where characters break into song due to lack of script to drive the story. Or even an audition to be Heaton’s replacement in the Beautiful South, something which wide-eyed fan boy Garth David would happily take up.

Production-wise, it appears rather am-dram. Carthy’s pulpit sways flimsily and the singers’ white seats are clearly stage chairs with a sheet over them. The scenery is nothing more than rigging with a neon cross and it lacks the panache of a touring production.

The humourless concept of The 8th seems unfinished and appears unrefined. There’s an undoubted cyber-punk dystopia feel to it, but that whole paradigm peaked 20 years ago, and certainly shouldn’t be framed in the deep south. The story too is difficult to follow, with no obvious correlation between narrative, songs and the sin. Heaton even admits, “You looked confused at some points.”

The second half is reserved for sing-a-long-a-Heaton-hit. Each vocalist taking turns at Heaton karaoke; Aldred performs a truly spellbinding acoustic version of Sail This Ship Alone, and David’s One Last Love Song captures the beautiful simplicity of the song, while Abbot’s sweet harmonies delightfully accompany each song. Climaxing with The House Martins’ thundering Me and The Farmer was triumphant stroke and ensured Heaton’s reputation as a master song writer of kitchen-sink tales was maintained.