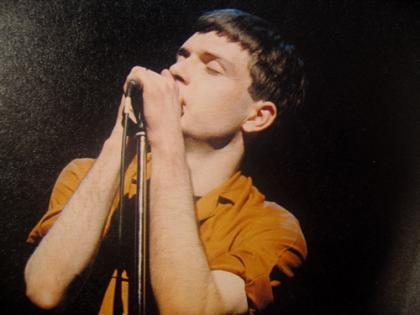 The untimely death of rock star is a sure fire way to ensure a legacy which outlives the life span of a band.

Legends are born this way with generations continuing to be inspired by their music; contemporary Dorian Grays watching over teenage bedrooms.

Whether it is Jimi Hendrix, Amy Winehouse, Tu-pac, or Joy Division’s Ian Curtis, the subject of Joy Devotion, their histories become ideological and their shrines pilgrimages for many music obsessives.

Joy Devotion: A Year in the Life of a Rock Shrine, is the work of Goldsmiths Phd lecturer Jennifer Otter, who took photographs of Ian Curtis’ memorial stone at Macclesfield Cemetery and Crematorium on the 18th of each month between 2009 and 2010, including the thirtieth anniversary of Curtis’ death.

The exhibition looks at the trinkets and gifts left at the stone, with a focus on the people who make the pilgrimage opposed to Curtis' music. It’s a strange collection of empty pill packets, blue teddy bears with England flags, and even crumpled train tickets.

Otter’s photographs occasionally manage to capture the devout nature of his fans; some are covered with Joy Division tattoos, lyrics scrawled on scraps of paper and emotional handwritten letters to Curtis.

Unfortunately it is nothing a music fan wouldn’t already expect to find at a shrine, and an Ian Curtis fan would be far better off making the journey themselves — a tenner via Megabus and the local service if you fancy it.

The photography is weak, more akin to poorly framed disposable camera snaps without any timeline or context, and the £15-£85 price tags reek of insincerity. One particularly cringeworthy photo has a group of school children standing around the stone limply holding a large Curtis portrait, which just looks staged.

The exhibition fails to grasp the motives behind devout fandom, nor address their subculture. And while seeing what people have left there does provide a glimpse into their idolatry, it misses the decay and replenishment idea at the core of the exhibition.

It’s a very good idea poorly executed, based around shots an artist would immediately delete. It seems to be nothing other than indulgent academic self-promotion. Oh, and there’s a book as well.