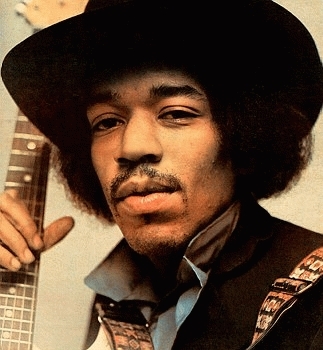 Jimi Hendrix’s career-defining London period is showcased at a remarkable exhibition looking at how Jimi came to our capital a blues boy and left a rock god.

Opening for what would have been the legend's 70th birthday, Hear My Train a Comin’ focuses squarely on the nine months which transformed Hendrix into a megastar.

Over 100 clippings, letters, items of clothing, and more map Jimi’s arrival, under the wing of  The Animals’ bassist Chad Chandler, in September 1966 until his return to America to play the Monterey International Pop festival.

Although there is a mural time line of Jimi’s life greeting you at the entrance, his time as a guitarist with Little Richard and Arthur Lee, and early death are left for another day.

The exhibit sheds fascinating and emotional light on an icon. There is a selection of his personal records, the original publishing contract he signed with Pall Music and his thumbed copy of the book which inspired Purple Haze, PJ Farmer’s science fiction novel Light of the Night.

The walls are covered with press clippings including Paul McCartney’s review of Purple Haze for Melody Maker: “It’s breaking out all over the place... Hooray” and Mick Jagger quotes: “That Jimi Hendrix record is just great! I wish I’d done it”.

However, it’s a simple postcard to his father which stands as the exhibition's highlight, shedding a unique view on to his relationships, and his dreams as it reads:

“I have my own group and will have a record coming out in two months called Hey Joe by the Jimi Hendrix Experience. I hope you get this card… I think things are getting a little better.”

The Hospital Club’s gallery is crammed with magical artefacts in captivating cabinets which go beyond rock-ology to give an insight into swinging London, its fashion and excitement, but also into human psychology and how it changes by absorbing  foreign cultures and mannerisms.

It has been curated by Seattle’s rock and sci-fi museum EMP, which is a pilgrimage for any music fan, so the artefacts are of the highest calibre and arranged in a clear and intriguing way.

Although it’s not a large exhibit, and the cuttings are rather dominant, it is an essential show for anyone with an interest in guitars or London’s music history. Not only are there breathtaking items on display – no more spoilers – but it’s also an opportunity to have a peek in the members only Hospital Club.