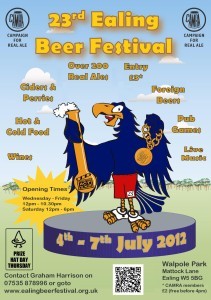 Given the current influence and popularity of American craft beer, it's perhaps unsurprising that there are plenty of Independence Day-themed beer events to choose from. If you miss out on these, however, you'll still have many chances to indulge in fine ales as the Olympics get underway.

Le Gothique, Wandsworth. The Sam Adams Boston Beer Party promises a special relationship of beer and burgers in honour of Independence Day. Tickets are sold out, but you can sign up to the waiting list here.

The Draft House, East Dulwich. It's not quite a festival, but the newest Draft House is hosting a free tasting of Dark Star Hophead with free foot-long scratchings, which is definitely a cause for celebration.

Ealing Beer Festival, Walpole Park. This four-day festival boasts around 200 ales, a selection of ciders and perries, foreign beers and English wines. Food, meet-the-brewer sessions and live music are also on the menu, as well as 'hat day' on Thursday. The festival's first day will also see the official launch of London: City of Beer, CAMRA's new website that will showcase London's fantastic range of breweries, pubs and beer festivals over the summer.

The White Horse, Parson's Green. The Sloaney Pony gets saddled up by cowboys for an American Beer festival, which features beers from US breweries such as Dark Horse, Rogue and the Great Divide. The festival's beer selection is accompanied by a special American food menu, a BBQ and live music, as well as special dinners (either a Goose Island feast or the PorkLife pop-up) on selected nights.

Half and Half Lounge Bar, Croydon. A selection of American craft beers, food and music will be on offer at this new bar's four-day festival, and the provisional beer list already looks promising.

The Duchess of Cambridge, Stamford Brook. 45 American beers from a wide selection of breweries will be available at this one-day festival, complemented by a free beer tasting from the Old Dominion Brewery. There will also be a hog roast, vintage craft stalls and treats from Outsider Tart.

West London Trades Union Club, Acton. If you're at the Acton carnival, stop off here to sample beers from Chatham's Nelson Brewery between 2-5pm. Free entry.

The Pembury Tavern, Hackney. More than 45 beers from a small selection of breweries will be available over the 5 days, with 25 on at one time.

Ale-ympic Crawl, Newington Green. This inspired Olympic celebration encourages you to roam between 5 Newington Green pubs, which will be offering a selection of 50 beers between them. Local ales, special Olympic brews and international beers will all feature, and if you're not the sporty type, don't worry — the pubs are only a short walking distance away from each other.

Three Compasses, Turnpike Lane. Their Festival of Redemption combines beers from the excellent Redemption brewery with coverage of the Olympic Opening Ceremony and other special events.