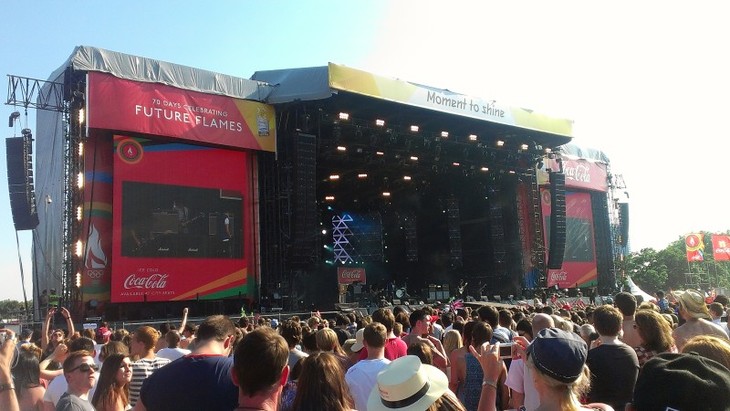 The line-up is an incredible array of pop taste from Morning Runner’s soft mam-rock to Rizzle Kick’s sheer brilliance. At £15 a ticket, the Torch Relay Concert seems a bargain for a day filled with toppermost pop acts but when the BBC can host Hackney Weekender and BT gives London the River of Music and London Live all for free, there is a sense of bitterness that megacorporation Coca-Cola can’t do likewise.

The arena is an immersive advert for The Sport’s sponsors; the lack of rides and entertainment kettling everyone towards corporate booths for multi-coloured plastic trinkets and free Coke. You can’t buy advertising like this but you can certainly sell it.

Arriving at the stage, though, the only concern is Eliza Doolittle whose breezy retro cabaret-pop is what summer afternoons are made for. Mr Medicine and Pack Up are moments of pure pleasure as she commands the crowd from the catwalk. We are treated to a brand new song and a short cover of Donna Summer’s I Feel Love — one of the best thing we’ve seen in Hyde Park all year.

You Me At Six’s polished emo, however, fails to do anything other than bring back bored memories of Smiley Miley’s Mileage Game at a Radio One Roadshow. Their three songs of teeny-rock anthems are like a humourless Darkness and prove why many think rock music is dead. What happened to the raw edginess of Mcfly or Busted?

Bizarrely for a concert, there’s a musical gap of an hour a half filled with a Jive Bunny and The Master Mix DJ and Twist and Pulse, two shouty lads in caps trying to sell us Samsung goods. Then a team of street acrobats do something with BMXs but it’s difficult to see what the overly motivational kids TV performers are doing on such a big stage.

The concert resumes with a sparkling show from Katy B. She’s an everyday pop star for the people, simply dressed in jeans and T-shirt, but the way she conducts the audience during the crunching beats of Perfect Stranger is masterful. The catwalk is hers and as she prowls along if for Lights On’s calypso tinged rhythm it is obvious these are the sizes of crowds she thrives on.

Mark Ronson, joins Katy B for their official theme of the Torch Relay, Anywhere In The World, along with somersaulting gymnasts. Despite the genius of B and Ronson, it’s awfully cheesy but hilarious to watch.

The focal point is the arrival of the flame, carried on stage by 19-year-old Taylor Rix who lit the onstage cauldron to massive applause. 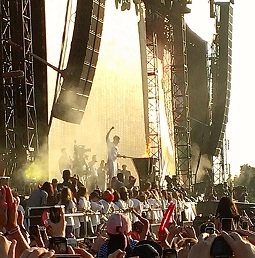 It's Mayor Boz who really steals the show with a speech mocking the American Mitt Romney, who had been dissing our organisational skills. Amongst the Boris chants, and plenty of boos, he declares:

“The excitement is growing so much the Geiger counter of Olympo-mania is going to go zoink off the scale.”

Later in the night The Wanted play a surprisingly marvellous set of perfect boy band harmonies, even singing a ten minute medley of Coldplay songs which, we reluctantly admit, is a bit spine tingling. Dizzee Rascal’s hour long set is as blistering as you expect, filled with pyrotechnics and crushing beats. Holiday is wonderful and Bonkers sends Hyde Park into fits of uncontrolled excitement.

It may be tacky, and overly corporate, but the Torch Relay Concert is a fantastic way to connect the flame with thousands of people.