Gig On The London Eye & Interview With Andy Grammer 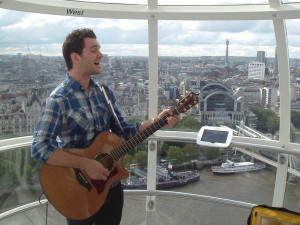 London’s skyline was the back drop to the most intimate, and highest, gig we've ever been to when beat-boxing guitarist Andy Grammer played in one of the London Eye’s pods.

The four song set was a highlight in a career which has taken him from playing for dimes on street corners to topping one to watch polls by the New York Post and Billboard.

The million selling former busker also took a London geography lesson as he pointed out buildings asking “which one’s that” particularly the Transformer shaped building that-isn’t-MI6-honestly-guvn’r.

If you don’t know Grammer’s Jack Johnson goes Lupe Fiasco groove yet, then get prepared to. He used to busk on Santa Monica’ Third Street Promenade and took up beat boxing to get the attention of passers by and he could easily compete with Killa Kella before being signed.

The New York born LA song writer was in town to launch his new single Fine By Me — the one deservedly played on Radio 2 all the time — and his Maroon 5 produced self-titled debut album.

His show is the latest in a history of gigs on London Transport. The marvellous Black Cab Sessions film acoustic sets in taxis, and in 2004, London band no one cares about any more, The Others, frequently played guerrilla gigs on Hammersmith and City line tube trains.

Londonist had a chat with Grammer under the carful watch of the South Bank's tourists after the gig.

Have you enjoyed your trip to London?
It’s been wild. I love the people; I think you guys are hilarious and a little bit crass in a way that makes me really happy. And of course all the music that comes out of here. I love Adele, and I’m a huge fan of Coldplay and of course The Beatles. Some heavy hitters come from here. I want to keep coming back.

Is it intimidating playing somewhere as small as a London Eye pod?
It’s more intimidating to just start playing somewhere like here [on the South Bank] and trying to get people to stop and listen. That’s how it was on the street, I’d be playing and people would be walking by and I had to figure out how to make a scene without annoying everybody.

Is that why you started beat-boxing?
Sure, I leaned beat-boxing strictly to gain attention on the street. When I was playing everyone would just walk by. But if I covered a Timbaland song and beat-boxed then a huge semi-circle crowd would build.

How long did it take to master it?
I don’t know if I ever did (laughs) I just kept doing it and it was working.

How did time on the street affect your attitude to the studio?
They’re both very different. The thing it influenced the most was my song writing. If I was singing a song that nobody liked it would be so humiliating, because you’re playing your heart out and nobody’s caring. That’s the worst thing ever. So those songs that wouldn’t make people stop would be scrapped and I’d have to go and write new ones, and figure out what would make people stop. So a lot of the songs on the album have been street tested.

What kind of negative responses have you received on the street?
Just having people walk past you and not care. It’s a pretty funny situation. You are clearly pouring yourself out artistically and the apathy that’s walking past you is pretty intense. Anytime the crowd doesn’t like it there’s an element of yourself not liking it. My job is to create music that people are gonna like.

What prompted the decision to finally commit to recording?
I always wanted to do it but I just didn’t have the money or anybody to help me get in there. Purely by building a buzz on the street my manager Ben found me, saw that I was selling some demo CDs and helped me get into the studio. Once we’d recorded some stuff it started doing really well on the radio.

How did the change from standing on the street to travelling the world affect you?
Not much, it’s the same hard work hustle. Every day I would get up really early, pack all the stuff onto my cart or load it in the minivan, head down to Third [Street Promenade, Santa Monica] and work it all day, just trying to get my rent. But today it’s get up really early, fly to England. (laughs) It’s all the same hustle with the same goals you know. I still think every day about how I’m going to affect people with my music and make them happy with the songs I’ve written.

You played Ladies in the pod [a song about his mother's death from breast cancer] is it easy to a write about such emotive issues?
Music is like ketchup or mustard on the hot dog of life. Something happens in your life and the music you put with it makes it taste a little better. Like when you have something in your life you can relate to in my music, hopefully it will add something to enhance your life. I personally find the stuff that’s more connected to humanity does it better.

Do you like to keep any separation between you as a performer and your personal life?
Wow, that’s a difficult one. I’m not really a big fan of knowing exactly who the song’s written about. If I hear a song, I don’t usually like to hear, ‘oh it’s this person’ or whatever. There’s something cool about the mystery.

You have a really strong Twitter presence. How important is it to have that connection with your fans?
There’s never been a time where musicians and fans can be so closely linked, from all across the world. Someone can send me Tweet from Venezuela and be like, ‘hey, what did you mean in this song?’ and if I want to, or I if feel like it, I can tell them, and what to check out for more. You’re talking to the whole world immediately. Or you can do fun little fan give-a-ways saying I’ll send a CD to the first person who figures out this lyric.  It’s something that if you’re an artist you have to be taking advantage of right now.

How exciting is it finally have the album coming out in England?
I’m SO excited. It’s my wildest dreams to have it coming out across the world and especially here. It’s unbelievable.

If you or the album was an Olympic sport what would it be?
That’s a great question, you’ve got me. My music is like, I’d say, gymnastics because it’s very bouncy. Basically what you have is me taking hip hop words, and fast word play, and throwing it over chords and finding a balance so it makes me think of a guy on a pummel horse.