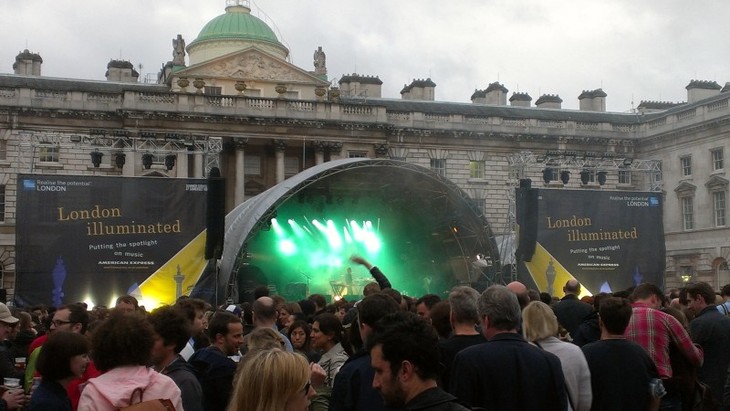 Somerset House’s annual series of outdoor concerts have firmly established themselves as the highlight of London’s festival season, with an annual line-up of aurally inspiring headliners such as tonight’s French electro-proggers M83, and a few random choices; The Enemy? Really?

It’s Somerset House itself which is the real headliner. Its magnificent courtyard swells the hubbub; the grandiose opulence inspiring a real sense of civic pride. There’s also an unparalleled excitement as one walks through the Stand's gateway into the stone quad to see a rock concert with beer sherpers peddling beers for a fiver.

After a weekend of soggy woodchip at Hard Rock Calling, the sloping courtyard cobbles are decidedly civil, although the security is less so. With people perching on railings — there are no seats — a burly blonde descends, warning that the metal bar could ‘snap’. Tact obviously isn’t in the training manual.

The enclosed nature of the courtyard is perfect for electronic music, the walls allowing support act Susanne Sundfør’s colossal beats to throb with the eighteenth century stone, while the open skies provide a much needed breeziness.

Unfortunately, Sundfør resorts to unnecessary and humourless warbles, depriving her set of any distinct direction. With new Nordic electro acts seemingly emerging every week, there was nothing to make her stand out from the moody synth scene, other than slightly heavier beats than some contemporaries.

Flanking the stage are corporate banners proclaiming “London Illuminated”, which is fitting, considering M83’s light show. The barrage of greens and purples relentlessly attack the dusk like a Star Wars battle during opener Intro, following a presence on stage of a cloaked figure imperially shooting laser lights from their fingers.

Anthony Gonzales’ band’s pummelling beats are ear shatteringly monumental as they support the relentless space-age synths and screeching guitars spiralling from the stage, and as Teen Angst and Reunion career around the quad, it’s clear we are in the presence of a majestic band.

They are surprisingly ferocious live, putting on a greater spectacle than fully fledged rock gods. By taking layers of waving shoegaze, and giving it a neo-rave fire cracker, M83 have succeed in making progressive electronica at home in the stadium.

Somerset House is the ideal place for M83, the Seamen’s Hall end acting as an underwater paradise thanks to the jaw dropping visuals during Year One, One UFO, which are further added to by the remaining wings illumined with dancing pinks. It was an audio-visual joy to behold.

Climaxing with the epic Coleurs M83 prove they are the band to carry on the legacy of innovative prog-tronica, the latest in a line of Parliament, ELO, New Order and Spiritualized — bands who transcend genres to perform wonderful galactic dance music. London is privileged to have them play at its heart. And Somerset House? Wow, what a venue.