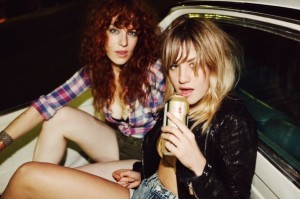 Each year Hard Rock Calling attracts the biggest rock gods in the world to London for three days of guitar solos, Marshall stacks and enough raw attitude to power all the machines which chopped the 8 million litres of woodchip spread over Hyde Park to make it usable after Wireless.

This weekend, grunge icons Soundgarden bring Slaves and Bulldozers and Spoonman to Friday’s headline slot while Sunday has Paul Simon celebrating 25 years of Gracelands, and yes, Ladysmith Black Mambazo will be there.

But of course, it Bruce Springsteen’s three hour set on Saturday night which really marks the festival as a must-see event.

Megastars appear in all corners with John Fogarty, Iggy and the Stooges, The Mars Volta, Big Country, Fyfe Dangerfield and the bloke from Star Sailor gracing Hyde Park with their epic riffs.

Despite what all the fey, electro-pop fans will have you believe, rock lives on. Here are our 10 must-see acts.

Deap Vally, Hard Rock Rising Stage, Friday 6.40pm
LA’s Lindsey Troy and Julie Edwards’s primal garage blues is the gritty and liquor-spittin’ music of dreams. Troy’s Robert-Plant-goes-Janis-Joplin howl and Edwards’ John Bonham thunder drumming, was seemingly born in the gutter outside the Viper Room where a beer bottle and a battered guitar amp are the only currency. They’re the buzziest buzzband in the world right now, and deservedly so because they rock harder than anyone else in Hyde Park.

Jack Savoretti, Hard Rock Rising Stage, Saturday 5.45pm
Being raised in London a part Italian and attending an American school in Switzerland gives Savoretti his deep NATO drawl. His acoustic rock has a raw sincerity which borders on the confessional; although exactly how many wrongs, other than breaking hearts, the 28-year-old pan-European Mr Darcy could have committed is debatable. Heart-wrenchingly thunderous melancholia certainly isn't one of the wrongs. His embodiment of classic folk is outstanding and almost a parallel to Cat Stevens and Simon and Garfunkel’s emotive power.

Gary Clark Jr, Pepsi Max Stage, Saturday 4.30pm
The 27-year-old from Austin Texas is being dubbed the saviour of blues and the new Jimi Hendrix, such is the guttural power of his screeching swamp rock. Having played guitar since the age of 12, Clark Jr spent his teens playing, presumably, playing spit 'n' sawdust juice bars before his blues resurrection led him to share Sheryl Crow and Stevie Ray Vaughn’s stages. It’s only a matter of time before The Grammys start rolling in.

Punch Brothers, Main Stage, Sunday 3.45pm
New York isn’t an expected location for traditional American folk, but Punch Brothers’ progressive, rapid fire, Bluegrass framed in classical musical structures is a truly impressive take on the revived genre. With a singer who sounds like the fella from Fall Out Boy and their intricate jazz infections, they are wrestling the banjo and fiddle from the clutches of Mumford and Sons’ mediocrity. Their music is dark and complex, and hardly barn dance clog stomping, yet it’s magnificently catchy and alluring.

Dawes, Pepsi Max Stage, Saturday 5.20pm
The west coast has grown up with the AM sound of Crazy Horse and The Eagles while sniffing gasoline and swigging Bud’, and Dawes are reliving the Laurel Canyon dream. The LA quartet take the classic emotion of Jackson Browne and rootsy resonance of their peers to create fine-tuned Americana. In the absence of Tom Petty at Hard Rock Calling, Dawes carry the spirit of the everyday working man.

The Launderettes, Hard Rock Rising Stage, Friday 6pm
Since 1996 this Oslo five piece have been careering around the world with their garage rock freak outs. They take the simplest of RnR riffs then hangout with Billy Childish and Kathleen Hannah. Their two-minute gems are laced with “yeah yeahs” and stomping organs as though The Sonics wore neckerchiefs and covered Cramps B-sides. They are harder than Sleater Kinney and groovier than, er, The Flaming Groovies, and will turn Hyde Park into to a psych-out Valhalla.

Peggy Sue, Band Stand Sunday, 6pm
Brighton’s darlings of the indie folk scene mature like the finest of wines, while staying accessible and affordable. Whether they are playing a free Bandstand Busk or globe-trotting across the hippest festivals, their dark laments surpass all of their folky peers. Their second album, 2011’s Acrobats, creaked with ghostly bittersweet tales, which seductively secured their role as swashbuckling acoustica’s rightful heirs.

Bwani Junction, Hard Rock Rising Stage, Sunday 2.50pm
If afrobeat is the indie disco sound of 2012 this Edinburgh band are going peak time. Their sunny riffs and tribal pop rhythms are sprightly and exciting without becoming rambling. They should really be called Soweto Bicycle Club as their detached echos resemble their Crouch End peers. Like Two Door Cinema Club and Vampire they aim to invigorate dance floors.

Robert Randolph, Main Stage, Sunday 2.45pm
As a master of the pedal steel guitar, Randolph has taken it out of the South Pacific and into New Jersey’s funk clubs. He learned his trade in churches, and brings this gospel training into his phenomenally exciting live shows, which combine Americana soul funk and African rhythmic dancing. His music is like a battle between bass, organ and steel competing for attention while Randoph’s soul-man howl dictates the mood.

Drop Out Venus, Bandstand, Friday 7.15pm
This Deptford trio call their music junk jazz, a term which doubles as a manifesto to recycle the organic freedom of pulp-jazz resulting in a phased, almost DIY Cocteau Twins dream-adelia. Their electrifying mystery gives their live show a raw edginess, smoothed with a sweet tension which is excitably genre defying. Their abrasive Velvet Underground nihilism will be the most invigorating experience of the weekend.