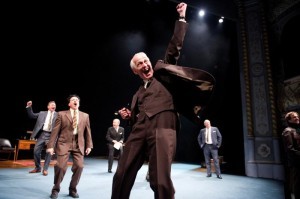 Michael Frayn’s 2003 play explores the relationship between West German Chancellor Willy Brandt and his personal assistant Günter Guillaume between 1969 and 1974. Guillaume is actually an East German spy, but, recognising that only Brandt will forge a good relationship with the East, endeavours to help him maintain power and, in the process, comes to both love and trust the former anti-Nazi.

Based largely upon fact, Frayn’s creation explores German and international politics in the early 1970s, but also human nature as a whole. When Brandt becomes Chancellor in 1969 it is the first time that the left leaning SPD has been in power since the early 1930s, and even then it has had to coalesce with the centrist FDP. Behind Brandt lie a wealth of ministers and party men with their own aims and agendas, who are as ready to turn on him when he becomes a liability as they are to support him while he remains an asset. The few disparate characters we hone in on represent in turn West Germany as a whole with its sixty million separate egos.

The genius of Democracy is to embed its wider political and philosophical points within a deeply intimate study of the relationship between Brandt (Patrick Drury), an ambiguous figure who is capable of winning support simply through his presence, and Guillaume (Aidan McArdle). In this Sheffield Theatres production, however, the two lead actors play their individual parts well, without always emphasising the pathos enough in their exchanges and interactions. Frayn’s script relies heavily upon characters explaining quite complex points and, in the absence of sufficient emotion, the drama can feel inadequately visceral or moving.

Still, a few key scenes really hit the mark, while there is fine support from William Hoyland as Herbert Wehner and David Mallinson as Helmut Schmidt. This production of Democracy is reasonably good, but a trip to see it is recommended chiefly because this is such a first rate play.