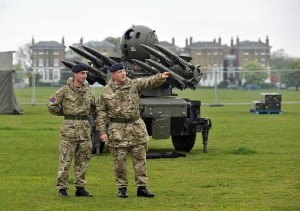 The Ministry of Defence's plan to place missiles in various positions around the Olympics site faces a blow today, as residents of Fred Wigg Tower in Leytonstone go to court for an injunction to stop weapons being stuck on their roof.

Just to be clear: this is an entirely different building from the one in the news a couple of months ago, the gated Lexington Building in Bow, where residents also went nuts at the prospect of having high velocity missiles stationed above their heads. The MoD still hasn't confirmed whether its going to put their massive weaponry plans into action, so the Leytonstone folk hope there's still a chance to block the whole exercise. The Press Association quotes their lawyer, Martin Howe, saying:

Security of the Olympics is of course extremely important but could the MoD not find any other way of protecting the Olympic village than by putting the lives of hundreds of innocent council tenants at risk by turning their homes into a military battlefield position?

The blocks of flats are due to have "high velocity missiles" plonked on them. Four other sites – Blackheath Common (which is going to be a Lewisham Council Olympics party site), Oxleas Meadow, Epping Forest and the William Girling reservoir – are likely to get a set of Rapier missiles (the BBC has a video explaining why the MoD wants them protecting the Olympics).

Photo of Rapier missiles by mikekingphoto from the Londonist Flickr pool