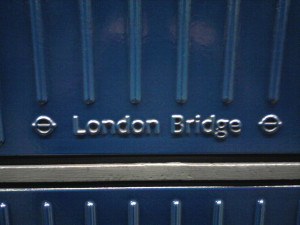 Amid the frustrations of people struggling to get the train home after Sunday's Jubilee pageant, what might not have been clear was that crowds at London Bridge were actually taking part in an Olympics test.

The SE1 website has photos of people queuing down Tooley Street and at the Duke Street Hill entrance, some rather unhelpful signage and a glimpse at the planned queueing system. Passengers wanting to use the tube were directed to Duke Street Hill, those wanting trains were asked to enter via the bus station main concourse and anyone wanting to leave was ushered towards Tooley Street or Joiner Street. If you use London Bridge take note: this system will be in action again this Thursday, when the station has a workday Olympics test run.

SE1 has also discovered that Olympics travel changes are still being made: a Network Rail briefing given to MPs indicated that London Bridge will likely be exit only 6-10pm on 30 July, and Southeastern services may not stop at the station to ease overcrowding. Neither measure is mentioned on the Get Ahead of the Games website which, annoyingly, has separate maps for tube and rail.

London Bridge isn't the only station changing how it works during the games; Waterloo will have a queueing system in place for trains towards Weymouth, St Pancras will have queues for the Javelin service and you won't be able to get to the station from the northern ticket hall, plus numerous changes to stations around Olympic venues in south east London. We can't find information on any other stations running tests though – anyone with better information, please let us know in the comments.

Photo by The Green Odyssey from the Londonist Flickr pool