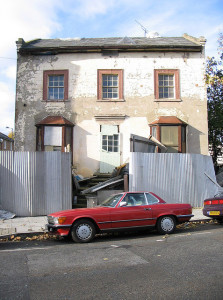 The house once occupied by William Lyttle, the fabled "Mole Man" of Hackney who spent years digging a warren of tunnels beneath the dwelling, is to be auctioned in July.

Mr Lyttle's subterranean saga came to city-wide prominence in 2006, when Hackney council ordered him to cease and desist with his life's work: a network of tunnels and caverns, some up to eight metres deep and up to 18m long, dug beneath his house at 121 Mortimer Road, N1.

The former civil engineer's handiwork notched up hundreds of thousands of pounds in repair bills, and inconvenienced neighbours when, in 2001, an 8ft hole appeared in the pavement. Despite this, Mr. Lyttle's endeavours and evident eccentricity endeared him to many, though the local council was not among them: he was evicted and re-homed in a tower block, where he died four years later.

Upon his eviction, Mr. Lyttle argued that the house was "not saleable", and indeed he's been proven right: it's expected to fetch £750,000 at the auction, but planning permission has already been given for two townhouses on the site.

More about the Mole Man in this Folk Olympics video.