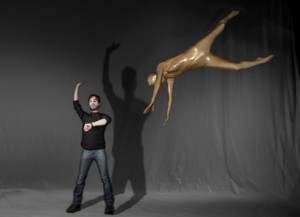 Review: Bloom! Collective, The End Is Near

The End Is Near was a clean, pleasingly unpredictable take on the modern day super hero, which was by turns funny and astute. Satirical reflections on the associated clichés were pitch-prefect in their simplicity; combining grandiose music and the ubiquitous cape, a series of sketches unravelled the hero. He’s hurting others to save them, and enlisting the help of the audience to do so, he’s regretting grabbing a sneaky grope, as he gets his ass kicked by a stronger hero (oh – and she’s a she), he’s actually gay, and not very interested in that attractive naked woman squealing for help. Comfortably straddling the space between intellectual theatrics and, well, dancing (with a quietly inventive movement vocabulary) this show was compelling, well paced and, as seems to be one of the collective’s preoccupations, questioning the nature of dance in an original fashion.

The Guardian and The Public Reviews saw Zoi Dimiriou’s You May!, which philosophically considered the pressure for over-achievement in contemporary society.

The Independent and The Public Reviews saw Because We Care by Colin, Simon and I, a piece that tested their admittedly tense working relationship and the limits of male friendship; blurring the lines between care and abuse.