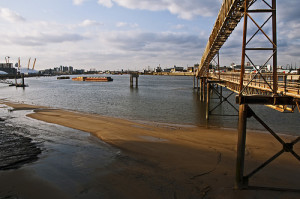 The government has added its backing to the proposals for new river crossings in the east, which could be open by 2021.

Transport Secretary Justine Greening designated the cross-river schemes, including the Silvertown road tunnel and a ferry crossing at Gallions Reach, a 'Nationally Significant Infrastructure Project' (try saying that quickly). This means that the approval process can be streamlined, making a completion date within the next ten years a more realistic target.

In January Boris Johnson pledged a new road tunnel linking Greenwich Peninsula and the Royal Docks to ease congestion in the east. In a public consultation organised by Transport for London, 93% agreed that more river crossings were required and 82% favoured Silvertown for the tunnel.

But like any other major transport project, it didn't find favour in all quarters — 853 Blog has spoken out vociferously, citing increased traffic and pollution. The Green Party are unsurprisingly against it, the London Cycling Campaign believe it's based on flawed data, while The Greenwich Phantom thinks it won't happen. Given the rise and fall of many other transport infrastructure projects over the years, the latter could be closest to the mark.

TfL is currently working on the tunnel design and will consult on the proposals later this year.