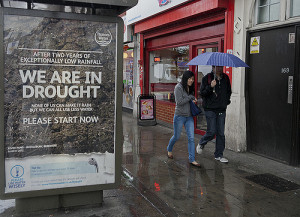 The question of whether the relentless rainfall over the last couple of weeks would spell an end to the hosepipe ban has been answered by Thames Water in a press release today.

The water company says that the ban, announced on 5 April, will remain in place despite London receiving more than double the historic long-term average rainfall for April. Thames Water's Richard Aylard said:

“Yes, we have had a seriously soggy April. We had more than double the rain we would expect the last month. In fact, it hasn’t really stopped raining since we and six other companies imposed ‘hosepipe bans’ on April 5. We are alive to this irony, and our contribution to the endless talking point that is the British weather.

“But it took the two driest years since records began for us to get into this drought and one wet month, even one as wet as April, will not be enough to get us out of it. Last month’s downpours will wipe out the shortfall for the last couple of months, but not all the dry months before that."

The news comes as the Environment Agency issues 37 flood warnings across Britain. A brief respite from the rain appeared yesterday but the forecast approaching the bank holiday weekend is looking inevitably bleak. We give it less than a day before someone says that it looks like we've had summer already.