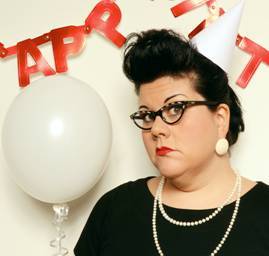 Went to Amy Lamé's Unhappy Birthday, her performance / party thing at Camden People's Theatre, and it was CRAZY. It's autobiographical, about how much Amy loves Morrissey, how he was there for her as she grew up as an outsider. I don't like Morrissey, but it's her party, so everyone who goes sits there and listens to her. We even had to sing along with her at the end - Morrissey songs only...  Nothing like Glee, at all.

We played pass the parcel and Amy told a story with each thing that got unwrapped. People got dragged out and dressed up as Morrissey, she's posting ALL the pictures on Twitter ( #unhappybirthday), which is awesome because there's now a huge collection of normal people being Morrissey and dancing with her on the internet.

She got personal, a bit upset,  cut her hair in front of us, chased a guy around the room then tried to snog him, smashed her huge birthday cake and made us sad when she demonstrated that Morrissey is a total dick and can't solve anyone's problems, ever. Took off her t-shirt too... like, WHOAH.

The thing about Amy is that she's an outsider, a plus-size lesbian performer who puts on these shows to sort of own her outsider status. Even though she's mainstream now - hello, Danny Baker on BBC LONDON??? - she's still confrontational and subversive and challenging about fatness, queerness and identifying with a fey, gobby, floppy-shirted singer like Morrissey. Unhappy Birthday was an edgy, uncomfortable but riotous, messy teenage party. There was angsty music, junk food, bad dancing and unsavoury snogging, and a birthday girl working herself up, forcing people to have a good time while having a little breakdown herself. It's made me like Morrissey less than ever. Decorations were good. What an unusual birthday, kind of unhappy but fun too. I hope she's not expecting any presents.

Unhappy Birthday, at Camden People's Theatre until 12 May, then touring nationally. For tickets and more information, go to the CPT website.