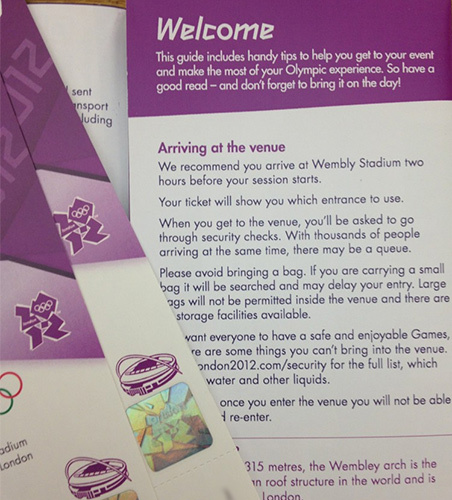 As Olympic tickets are transmitted to letterboxes across the land, those who grabbed seats for the football tournament could be led to believe that their event isn't being taken seriously when they read the accompanying pamphlet.

As this photo by @JamesBassett shows, information in the ticket pack advises visitors to "arrive at Wembly stadium two hours before the event starts". Easy mistake to make, perhaps, but an embarrassing one all the same, particularly as the stadium is correctly spelled later in the document. As James notes: "I know the real action is in the Olympic Park but I'd still expect Wembley to be spelt correctly". Perhaps they're using the same copyeditors who oversaw the election leaflet in which Boris Johnson's campaign referred to Marylebone as "Marlebone"?

Nerd note: the name Wembley comes from the Anglo-Saxon name 'Wemba' and the word 'Lea', meaning a forest or clearing. More in this map of Anglo-Saxon London.

Thanks to James Bassett for the image.