Do monolithic slabs of roughly-finished concrete make you go weak at the knees? If so, you are going to enjoy this roundup very much indeed.

Brutalism’s bold, monumental, and on the whole, deadly serious style remains controversial, years after it was replaced by Post-Modernism and the Neo Vernacular style.

There is a little confusion as to who first coined the term Brutalism — Swedish architect Hans Asplund claims to have used it in a conversation in 1950, but its first written usage was by English architect Alison Smithson in 1952. The term was borrowed from pioneering French architects and refers to unfinished or roughly finished concrete (beton brut in French).

The following are a mix of familiar and somewhat less well-known Brutalist buildings in London. Please add your own personal favourites in the comments section below as there are happily (or not, depending on your standpoint) many examples of this uncompromising architectural style in our beloved capital. 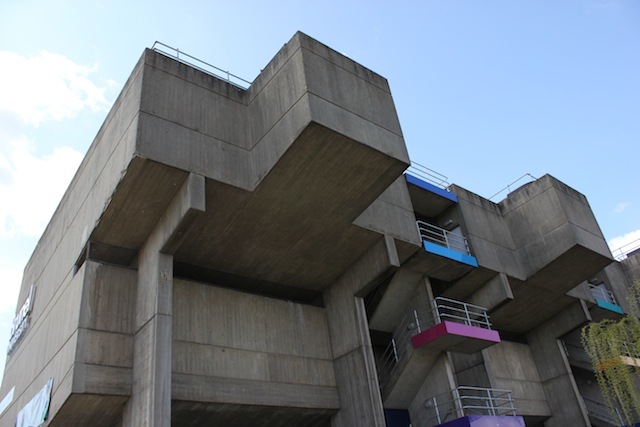 This imposing mid-60s building famously starred as the ‘Ludovico Medical Facility’ in Kubrick's legendary film A Clockwork Orange. For this reason alone it is well worth a pilgrimage. It has also appeared in various TV series including Spooks, Silent Witness and Inspector Morse. Its jutting geometric forms mark it as a classic example of mid-period (or ‘Massive period’) Brutalism. 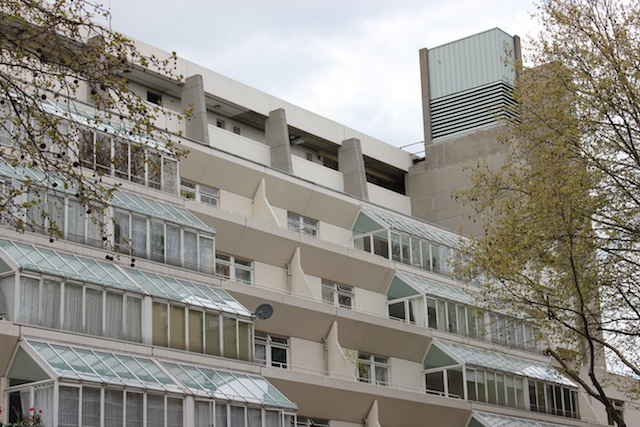 Designed by Patrick Hodgkinson, this grade ll-listed residential and shopping centre has made several TV and film appearances and even had a song written about it by 90s indie ‘supergroup’ Lodger. The impact of its striking service towers and flying buttresses is softened by the sky blue and cream colour scheme, lending the whole development an almost breezy air. 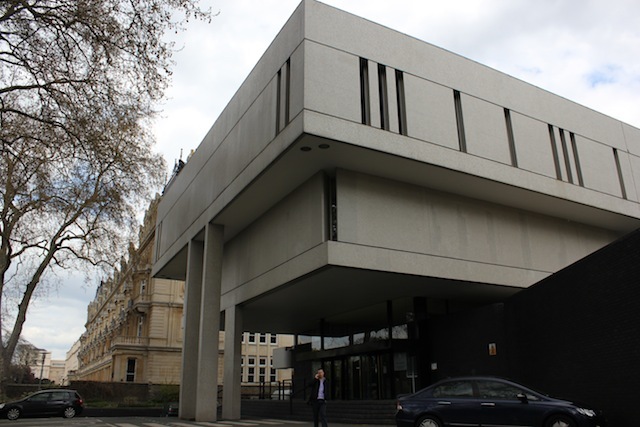 Sir Denys Lasdun designed the graceful and discreet geometries of this building. Never a card-carrying Brutalist, he presented a softer version of its often hard-nosed style. Surrounded by the splendid neo-classical terraces of John Nash, The Royal College of Physicians holds it own and manages to be both elegant and entirely of its time. 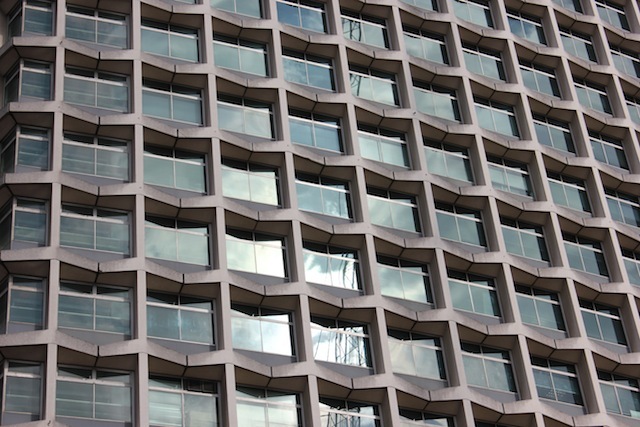 How many times have you walked past this Grade ll listed London landmark and never given it a second thought?

Designed by Richard Seifert and completed in 1966 it was described by the Royal Fine Art Commision as having an ‘elegance worthy of a Wren steeple’. Note how the gentle v-shaped window mullions soften and add interest to this slender, Massive period tour de force.

The swish Paramount restaurant and bar occupies the top floors and has outstanding views of London. There is also a free viewing gallery. Phone up beforehand (0207 4202900) to let them know that you’re coming. 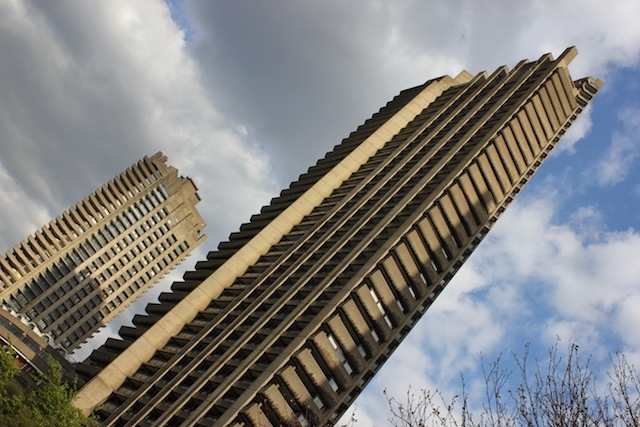 This sprawling (and remarkably easy to get lost in) late Brutalist development houses the wonderful Barbican centre, the largest performing arts centre in Europe and home of the London Symphony Orchestra. The accompanying Barbican Estate gives you the impression of being in a Brutalist theme park. Though voted ‘the ugliest building in London’ in 2003 by some dullards, the tranquil waterside setting, complete with fountains and swaying reeds, renders it positively romantic. The soaring towers and vast concrete volumes are also nicely contrasted by the warmly-coloured tiled paving. 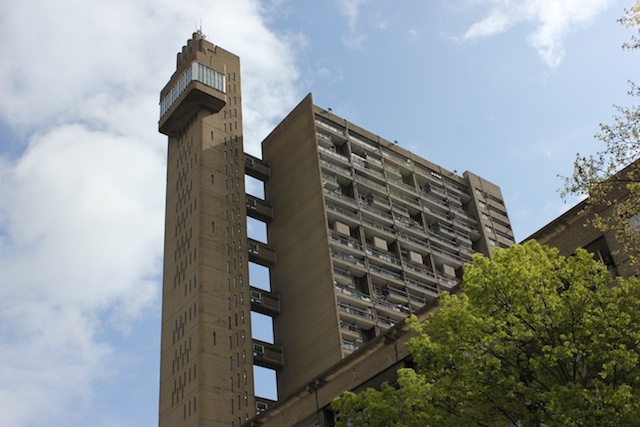 Designed by the wonderfully-named Erno Goldfinger (Ian Fleming appropriated his surname for the Bond villain, much to the architect’s chagrin), the equally loved and loathed Trellick Tower rears up majestically from west London and has featured extensively in television, music promos and film as well as appearing on mugs, bookends and t-shirts. The approach via Westbourne Park tube can take you through the charmingly named Meanwhile Gardens; apart from being pleasantly verdant, the view from the gardens gradually reveals Trellick Tower in all its splendour.

If you like what you see, check out the Brownfield Estate (nearest tube All Saints DLR, Map), where you can see three iconic Brutalist structures — Balfron Tower, Glenkerry House and Carradale House — for the price of one. 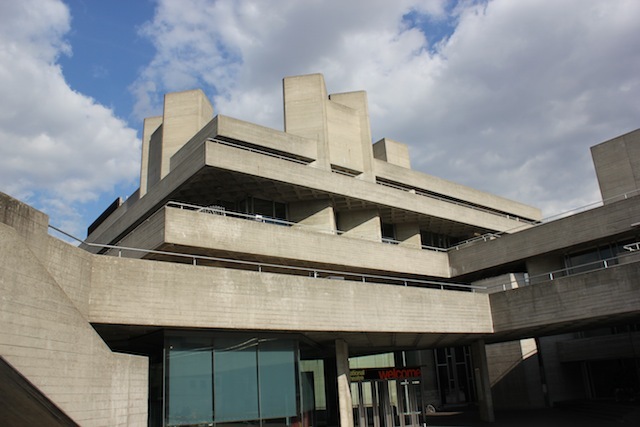 This bold cultural behemoth has been compared to a nuclear reactor and an overgrown car park, and is often as confusing to navigate as an Escher painting. However, its complex and imposing concrete volumes have many fans and there is an enormous amount to see and do in and around it. Have a good look at the texture of the concrete and you will see a variety of finishes, including the imprints left by the wood ‘shuttering’ (moulds) when the concrete was cast in situ. The Skylon restaurant, housed on the first floor of the Royal Festival Hall has wonderful views over the Thames and is recommended. 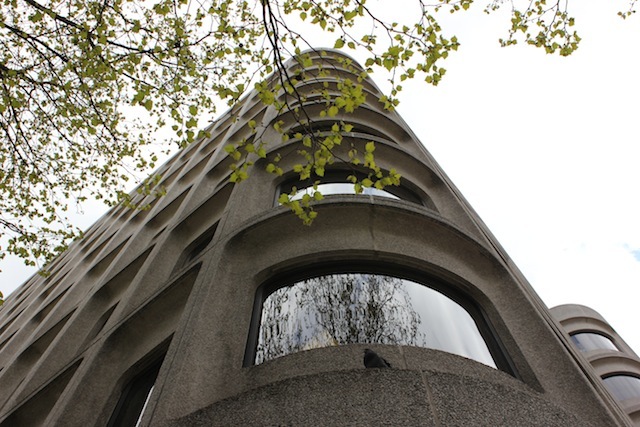 Apparently this distinctly curvy (for Brutalism) and attractive building has been earmarked for redevelopment (i.e to be demolished) so go and have a look at it while it still stands.

Built during the late period of Brutalism, The eye-catching curved corner windows illustrate how architects were beginning to move away from the more block-like structures of the Massive period. 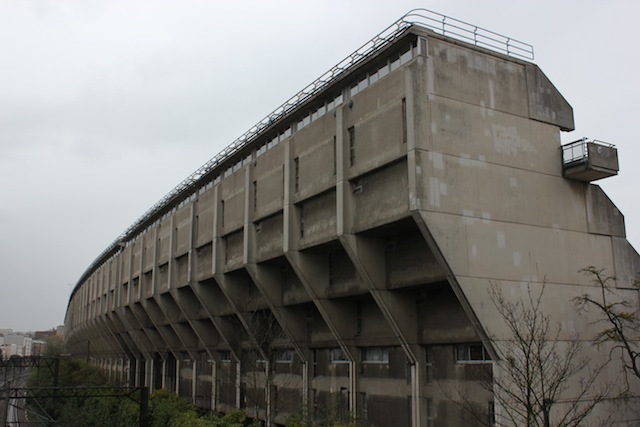 A high-density, low-rise housing project, this Grade ll listed building is mounted on rubber pads to minimize noise from the busy railway alongside it. Presumably the relative scarcity of windows on the side facing the tracks, greatly adding to its monumental appearance, was also designed with noise reduction in mind.

The best view of this arresting stadium-like aspect is from Abbey Road, just to the west of the estate as it crosses the railway lines. 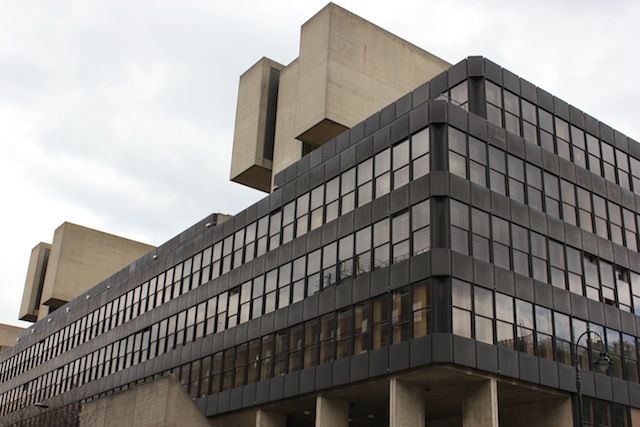 Completed in 1979, Sir Denys Lasdun’s enormous structure puts the ‘massive’ into Massive period Brutalism. The huge concrete service towers are highly characteristic of Lasdun’s style but here they are elegantly married with long lines of dark tinted glass windows which hark back to the earlier, pre-Brutalist, International style. A gorgeous hunk of a building, the classic view of it is from the south west corner of Tavistock Square, just to the north. 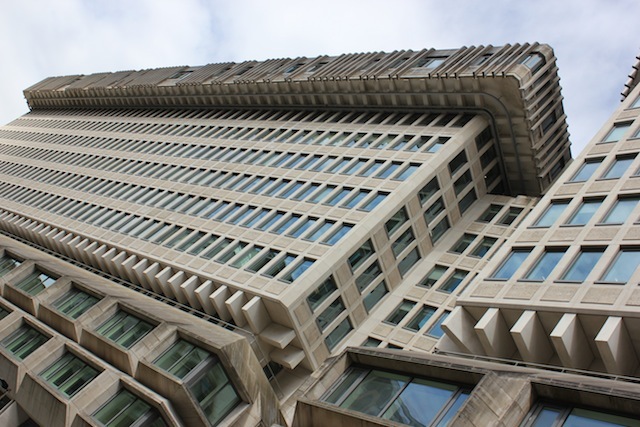 Truly colossal, Basil Spence’s building was accused by Lord St John of Fawsley of ruining St James Park. However, it has a particularly impressive aspect when viewed from the southern area of the park. Unmistakably Massive period brutalist, the cantilevered projection near the top is said to have been inspired by medieval Italian fortresses according to Alexander Clement in his excellent book, Brutalism: Post-war British architecture. 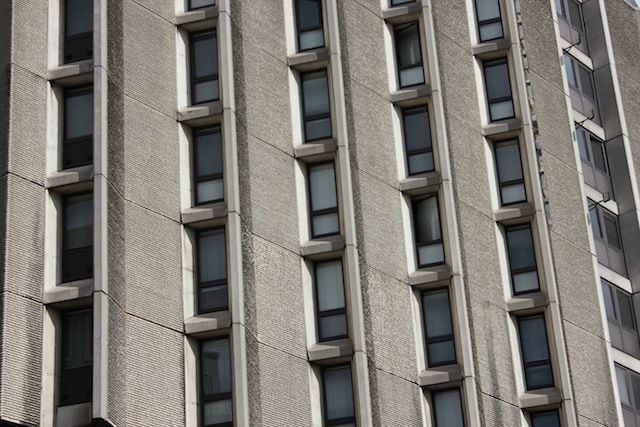 If you are an out-of-towner and are looking for somewhere to stay in London, how about the thoroughly Brutalist St Giles Hotel? It’s handily located for visiting the many Brutalist buildings in central London. The building comprises four large cantilevered towers with the windows cleverly arranged on sawtooth projections allowing lots of natural daylight and a good view from every room.

If you fancy getting up-close and personal with a few of the buildings, a short tour is easily possible. Start at King's Cross to admire Camden Town Hall Annexe on Euston road opposite the station, then take a short walk south to the Brunswick Centre on Hunter Street. Just west of this is London University on Bedford Way. Afterwards make for Tottenham Court Road and head south along it; you will pass St Giles Hotel on your left shortly before arriving at Centre Point.