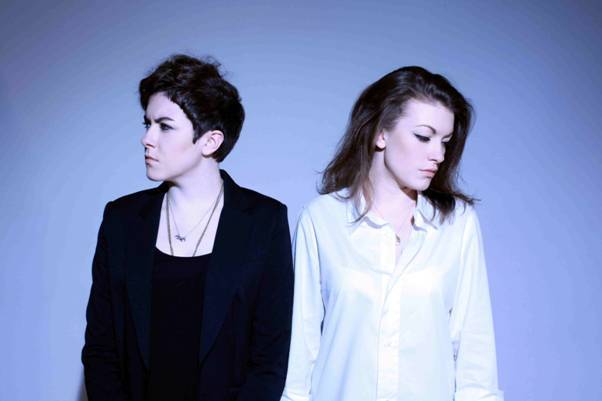 For the past two years 2:54 have been thriving in London’s underground scene, setting the way for the forthcoming nu-noir explosion.

Their dark subtle synth pop nods heavily toward The XX’s and The Mission’s  late night tales, but sisters Collette and Hannah Thurlow add a delicate humanity to create a brutal elegance.

Their self-titled debut album is released 28 May, filled with brooding, shadowy, anthems which encapsulate a bittersweet air of modern music. Most dramatic are the Thurlow’s voices, which are airy, in an almost religious manner, which effectively juxtapose their harsh guitars. They achieve the aural feeling of a subdued School of Seven bells.

On the eve of their release, and while preparing for their biggest headline show to date at Scala, we managed to catch up with Collette for a Londonist Q&A.

What do 2:54 sound like in a sentence?
Dark, menacing, feminine.

Who are your influences music and non-music?
Doolin Point in Co. Clare, Ireland where our album cover was shot, a place we spent our childhood summers. Also, soundtrack music, Angelo Badalamenti, Trevor Jones.

How exciting is to be releasing your debut album?
Incredibly! We're very excited for it to be out in the world.

How was it written and recorded?
Hannah and I completed all the songs at home, when we finish a demo at home, they're finished. We then took the songs to be recorded at Monow Valley in Wales with Rob Ellis, which was a great experience.

What area of London are you based and how has that area influenced 2:54’s music?
Hackney, for nigh on 11 years, it's a great place to live but it hasn't influenced the music I'm afraid.

What’s your favorite London venue and why?
Scala, it's a wonderful, warm sounding room with a great stage. We're really excited to be playing our own show there in June.

What’s the London gig circuit like for bands starting out and is it good to grow in and gain exposure?
We've only played a handful of shows in London, but I think all gigging is beneficial in the development of a band, no matter where you are in the country or the size of a venue.

Where would 2:54 like to play if you could play anywhere in London?
I wouldn't mind checking out the reverb in Battersea Power station.

What’s your favorite…
…London monument?
Anything in Trafalgar square because it still feels like a movie when I go there.
…tube line and why?
Central, hands down the quickest.
…place to hang out?
Soho, it still has a glamour to it, for me.
…Area for food?
All over, that's the beauty of London.

You’ve constantly been receiving critical and blog attention. Has this created any pressure for you, if so how have you dealt with it?
We just concentrate on making the songs and developing the live show, learning how to tour, those things.

What’s been 2:54’s career highlight so far?
Everything, being able to play music everyday with the four of us, with Alex and Joel our amazing rhythm section, is a dream come true.

What are your future plans?
The release of our album, our Scala show in June, America and festivals.

2:54 is released 28 May through Fiction records. They play Scala, Pentonville Road 7 June — tickets  £10+bf through gigsandtours.com