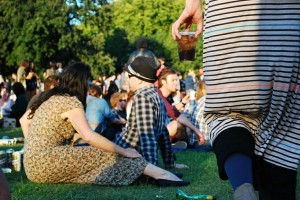 It’s impossible to be calm in the run up to Field Day. For months we’ve been scanning the line-up, catching up on the bands we didn’t know, and making countless must see lists.

Over the past six years it’s grown to become the highlight of the hipster calendar, and a showcase for the bands you’ll be following over the next 12 months.

Field Day also hosts established acts with the right amount of cult pizzazz to warrant inclusion at such a cutting edge event. This year is headlined by Franz Ferdinand, playing an exclusive show, while Tortoise and Mazzy Star prove why they're still phenomenal musical forces.

Of course it can’t all be standing in your brogues, watching buzz bands and Tweeting. There’s also the Village Mentality area which, along with its traditional tug of war and three legged race, has winkle picking and get the lead on the corgi contests. And of course some fine ales and food vendors from Clapham’s Venn Street Market.

The Field Day organisers have already prepared an interactive site map and line up, but we have selected our tips of the finest London bands playing during the day, as well as four essential international choices. You can also check out the bands playing through Field Day Radio on Mixcloud.

Savages 13.40 Eat Your Own Ears Stage
The buzz, hype and excitement surrounding Savages has been impossible to contain. Their few gigs have been sweatboxes filled with A&R, hacks and hipsters, but they’ve managed to pull off explosive shows every time. Their icy nu-noir is the stuff of musical dreams and is essential for any lover of music. If you try to think of a better debut single than Husbands, then best of luck.

Citizens! 13:30 Shacklewell Arms stage
If you like your indiepop with a fluttering dance beat then Citizens! are ideal. They’re a subtle Friendly Fires or a poppy Hot Chip, with flashes of The Communards. A secret show at The Great Escape revealed them as an energetically thundering live band, giving traditional pop sensibilities an adrenaline shot. By concentrating on being catchy and fun Citizens! have crafted a faultless crossover appeal.
Listen to Caroline here

Summer Camp 16:10 Laneway stage
We love Elizabeth and Jeremy, and their Scala show is our gig of the year. Luckily for us they’re back from touring the world for this summertime show of irresistible indiepop, which will feel like a house party celebration of their amazing achievements over the past 12 months. Their new single Always could just well be the summer hit we need to kick start the sunny season.

Jessie Ware 16:40 Red Bull stage
After a day of chillwave, buzzbands and poststep, we’ll need some slick perfect pop, and Brixton’s Jessie Ware can deliver it. Having worked with SBTRKT and Jack Peñate she’s managed to hone a beautiful brand of subtle electronica, like a lo-fi Katy B. Her single 100% was a simple rhythmic lullaby, and first previews of her debut album Devotion reveals an electro-pop masterpiece.

The Vaccines  20:50 Laneway stage
Despite being the Marmite of the indie world The Vaccines are staking their claim as Britain’s premier guitar band. They’re an arena juggernaut which can’t be stopped and with a Reading Festival slot just below Florence Welch it’s going to continue. Their Field Day appearance is abhorrent to the Hipster extremists, but their new single No Hope is guaranteed to get the most hardened scenester dancing.

Kindness 17:20 Laneway stage
Hackney’s Andrew Bainbridge burst on the scene with a flurry of hype in 2009, just to disappear. This was a wise move, as when he re-emerged with 2012’s debut album, World, You Need A Change Of Mind, his RnB bass groves were slicker and his slacker-dance throbbed with sassy elegance. He even covers Any One Can Fall In Love and you can’t get more East End than that.

Modeselektor 21:40 Bugged Out stage
The Berlin glitchy techno legends have been pioneering leftfield electronica for over a decade. They have influenced and inspired artists as varied as Apparat and Thom Yorke, thanks to a unique take on deconstructed beats and shrugging RnB. Whether they’re using vocalists, rappers, or even just pounding bleeps, Modeselektor manage to enthral club and gig fans alike.
Listen to Black Block here

The Men 19:40 Shacklewell Arms stage
This Brooklyn four piece make the kind of gritty agit punk that makes you want to drive down The Mall really fast and do hand brake turns. They’re rampant and gutsy yet manage to hold some classic melodies among their fist-pumping choruses, in a similar vein to The Replacements. The Men rarely play the UK so this is a sure fire treat.

Mazzy Star 21:50 Village Mentality stage
Hope Sandoval’s voice and David Roback’s guitar are the stuff of indie legend, and are as perfect as gentle haze-gaze can be. If there was ever a band who encapsulate the bittersweet melodrama of a day dream then it’s Mazzy Star. Modern bands from Beach House to Bon Iver owe a debt to Mazzy Star but none come close to this Santa Monica duo’s majesty.

Afrocubism 16:55 Village Mentality stage
As a supergroup of Cuban and Malian musician Afrocubism combine different strands of world music to create an unique sound. Playing Cuban rhythms on African tamani’s (talking drums) and putting the balafon – an early marimba – with salsa strokes, they have earned global accolade and upped the benchmark set by such luminaries as The Four Brothers and Buena Vista Social Club.

Check out all of London’s festivals with our guides to indie and rock, dance and RnB, and commuter belt festivals. Photo by shuma.rani from the Londonist Flickr pool