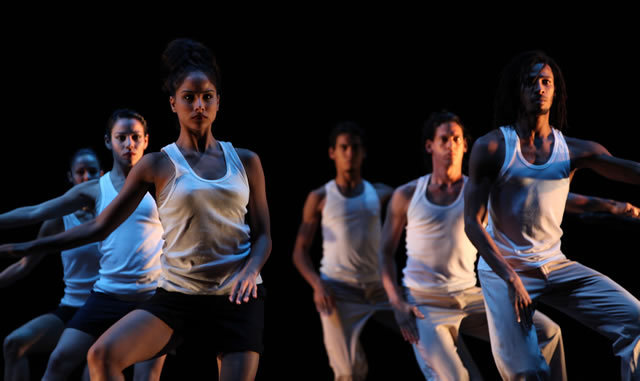 Where the word “Cuba” is mentioned in connection with a dance company, the words “sexy” and “spirited” are never far behind. So let's get those formalities out of the way now: the 24 dancers of Danza Contemporánea de Cuba are young, athletic and gorgeous; their extensions fly as high as their hips wind low; and this energetic programme celebrates both modern dance technique and Cuban flavours, in places very successfully.

Guest choreographer Itzik Galili’s work is well-represented on the Sadler’s Wells stage lately, with works A Linha Curva and Sub included in recent Rambert programmes. His new commission for DCC, Sombrisa, is more of the same – a mass ensemble work full of hyper-energetic action and lots of legs on show. This particular version of the Galili ouevre marries Steve Reich’s tribal Drumming No. 1 to scissored legs and salsa shimmies; for some reason, this one is performed in boxing gloves. By trying too hard to be sexy – the women in tiny frilly skirts winding provocatively and gesturing to their bosoms with gloved hands, the men writhing and diving – Sombrisa misses the mark and ends up looking tawdry.

If Galili’s effort to be sexy is too obvious to be successful, the same can be said about Finnish choreographer Kenneth Kvamström’s attempt to be fun. A humorous homage, as the name (and punctuation) suggest, to Bizet’s famous melodrama, Carmen?!   is neither an all-out romp in the style of the Ballets Trockadero de Monte Carlo, nor a sensitive modern adaptation in the mould of Matthew Bourne’s. It’s rather a one-note joke, with the case of seven men pulling exaggerated flamenco poses and histrionic faces to no particular end. At five minutes long, this would have been quite fun. At a drawn-out 25 minutes, it’s anything but.

The programme is rescued by a revival of Mambo3XXI, DCC’s 2010 production by house choreographer George Céspedes. Set to music by “Mambo King” Pérez Prado remixed by Beny Moré, the work nods to Cuban rhythmic and movement traditions without being engulfed by either. Dressed for a 1950s PE class in white vests and long shorts, the 24 dancers begin Mambo3XXI in a rigid grid formation that suggests a highly-monitored, quasi-military society. It looks great; but soon the pace steps up and the dancers break free of both the formation and the rigid actions, rippling into the space with arcing torsos and gyrating hips. It’s mambo, but not as we know it – towards the end of the piece, sensuous doublework takes over from the segmented unison, building to a luscious finish. By keeping the obvious to a minimum and the dance material creative, Mambo3XXI succeeds in being both sexy and fun where the rest of the programme stumbles.