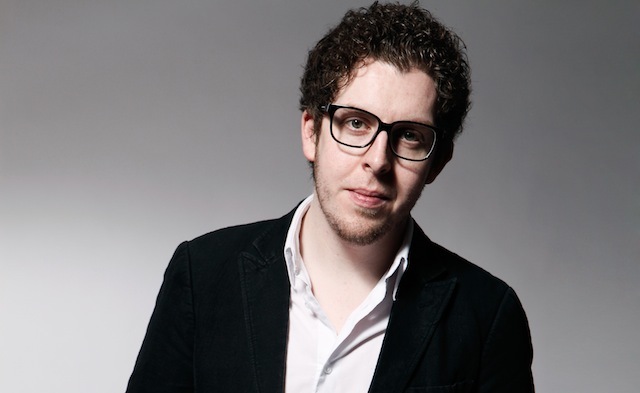 Carl Donnelly is a comedian from London who wears Hunter S Thompson-style glasses and tells funny jokes. Ahead of his performance tonight at the South Bank's Udderbelly, we asked him about podcasts, British cities and the various benefits of performing in an upturned and gigantic purple cow.

What can the uninitiated expect from your show? Describe the jokes without telling them, you know. My show is selection of stories from the last year such as me accidentally showing a hairdresser a picture of me on the toilet and myself and two friends creating the greatest dance move of all time. As well as that, I have a selection of observations about pre-cut fruits. All of these are much funnier than they sound on paper.

Does performing in a big purple upside-down cow affect your material at all? We suppose it makes a change from those dingy underground lairs comedians normally inhabit. The Udderbelly has an enormous stage so I have plenty of room to show off my moves. I suppose the effect then is that I am more animated than in my usual gigs where stages are quite small and restrictive. I don't think the material changes due to it being a cow. I have very little cow-based material but if I think of any between now and the show, I’ll be sure to share it!

You're one of a growing number of comedians who are at the helm of their own podcast. Do you find podcasts are i. a useful way to work out new material; ii. a terrible, terrible way to work out new material; iii. 'fun'; or iv. none of the above. I'd say they are more fun than anything else. I do one with my comedian friend Chris Martin (not the guy from Coldplay), so we basically use it to catch up and discuss what we've been up to since the last one. As we're mates, it is normally just an hour of us making each other laugh. We try and keep it as loose and natural as possible so don't use it to try out material.

So anyway, which is better: London or Edinburgh? I'm a Londoner so am probably biased but I'd choose London over every other city on the planet — I don't trust anyone that says they don't like London. It is so big and varied that if you can't find a part you like then chances are the problem lies with you. That's not to say that Edinburgh isn't a great place as well though. Going to the Fringe each year means that it is the city I’ve spent the most time in other than London so it feels like a second home.