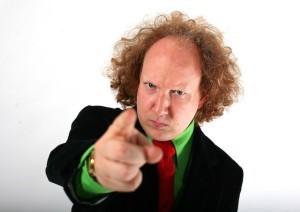 Andy Zaltzman is a comedian, podcaster and frustrated Russ Abbot. He brings his Political Animal show to the Soho Theatre this evening for an extended run, where every fortnight guests will consider the political hot potatoes of the day while the audience sits there and gets drunk.

We asked him a little about the upcoming show and changes he would bring to London if voted Mayor.

Q. Tell us a little about Political Animal.
Political Animal will probably bring down all remaining governments in the world through the medium of satirical stand-up comedy in a 120-seat room in Soho. The coalition government is quaking in its non-matching welly boots. The Bilderberg Group are nervously scanning the jobs pages for alternative forms of employment. Despots the world over are regretting their choice of career. Political Animal is back. In a regular, fortnightly slot, on alternative Mondays at the Soho Theatre, which is handy. I have not had a regular slot for the show for years, which is largely my own fault. You can expect me hosting a bill of three or four other comedians, some new, some older. All being unremittingly funny.

Q. You co-host a weekly satirical comedy podcast, The Bugle, as well as being a radio regular. What is it you like about talking into a microphone unseen that you love so much?
Partly, because of the fact that commissioners and producers have been more willing to have my voice heard than my face seen. Principally, because of the editorial freedom of podcasting – you don’t have to wait to have something commissioned, you can make and publish a show quickly and cheaply and hope it finds an audience, and you can put exactly what you want in the show, in exactly the way you want it. I’ve always loved making radio shows. It is much easier to make a show sound good than look good. It is also easier to make me sound good than look good.

Q. Play along, here: an administrative error in your favour leaves you as Mayor of London come the morning of May 4th. You didn't even know you were running, it's chaos. You are permitted to introduce one change before you are found out. What is it?
Replace all ‘Boris’ bikes with horses. And all cars with horses. Get London back to its roots.

Q. Your hair is quite something. What career do you think you would have pursued if it hadn’t grown like that?
Thanks. Or no thanks, depending on whether or you "quite something" is a compliment or an insult. I don’t think my hair has been particularly influential in my career path. However, had I had normal hair, I would probably have been one of the following: (a) a swimwear model; (b) Olympic 5,000 metre champion; (c) a mercenary fighting for justice and freedom around the world; (d) Chancellor of the Exchequer; or (e) Russ Abbot.