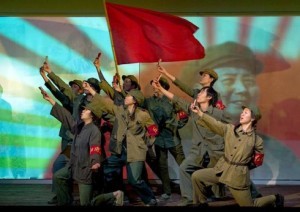 Jung Chang’s bestselling 1991 memoir Wild Swans, tells the story of the lives of Jung Chang, her mother and her grandmother in the turbulence of 20th century China.

It remains banned in her homeland; though, as Jung Chang says, this only adds to its intrigue: “[P]eople, including people working for the state censors, have sought out the book to read.” Now, Chang’s book has been adapted by Alexandra Wood to make a compelling play – the first in the World Stages London season, celebrating the cultural diversity of the capital through theatre.

Jung Chang’s mother (played with bright-eyed enthusiasm by Ka-Ling Cheung) and her experiences under the Maoist regime are the focus of Wood’s adaptation. Married to Communist comrade Shou-Yu (a damn good Orion Lee), whose initial idealism gives way to disillusionment and rebellion, the pair suffer torment and detainment in labour camps at the hands of the Red Guards, and daughter Er-Hong (Jung Chang), in an emotional turn by Harry Potter actress Katie Leung, must overcome the taint of association and escape to Britain to follow her literary aspirations. The fascinating story of Chang’s grandmother, forced to be the concubine of a Chinese warlord at age 15, sadly takes a back seat – though understandably, given the lengthy book spans three generations – but Julyana Soelistyo plays the obstinate mother-in-law to perfection.

It’s imaginatively directed by Sacha Wares, with music, choreography, singing, evocative video projection and some mesmerizing puppetry all working together to make this a vivid, powerful piece – and an ingeniously versatile set by Miriam Buether adds enormously to the experience. It’s a bold, impressive production, a carnival for the senses, colourful, fast-moving, touching, with a fair bit of humour in places and full of nice little moments of stage trickery. It doesn’t quite plumb the depths of the personal, individual experience in Chang’s story, but it’s an ambitious undertaking and it’s terrific that this epic story of survival and bravery has finally been reworked for the stage.