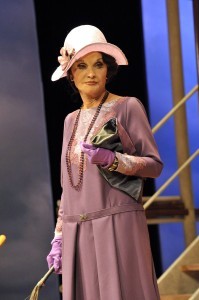 Scene: the deck of the paddle steamer Lotus on the Upper Nile , Egypt, 1935.

Young man, what are you doing on my boat?

I don’t think it's your boat, Mrs ffoliot-ffoukes. This is a public cruise along the Nile. Are you here with your niece, that young woman you keep ordering about?

Your manners are disgraceful. Worse than that awful socialistic young man who keeps bothering me about the New Jerusalem. And that clergyman, Canon Ambrose Pennefather. He drinks too many Gin Fizzes, and seems to be up to something.

Have you met a small, fastidious Belgian with a moustache and a curious grasp of English?

Nor me.  He can’t have been invented yet.

Things are not what they used to be.  The lower classes are everywhere, people keep shooting each other, and that stupid girl has lost my scarf again.

This one with all the bullet holes in it?

This is the final straw!  Those Egyptian stewards can’t be trusted.

Who could possibly want to kill such a glamorous ITV star — I mean wealthy English heiress — and on her honeymoon too? Could it be something to do with that woman who keeps following her around?

Why are you asking me?  She may have been rich, but it’s all new money. Trade!

Why do we keep hearing gunfire from the shore?

Some awful native wedding, no doubt.

Doesn’t sound like a wedding to me.  Must be something to do with the uprising everyone’s talking about. Egypt is on the brink of chaos. There are riots on the streets. And all on top of a stock market crash and a much longer-than-expected recession. Still, at least we can be sure this particular combination of events won’t be happening again in hurry.

I’m sorry, I am in an Agatha Christie play. Why are you discussing politics?

You may well ask, but it seems early Agatha had a political edge that didn’t last.

Interesting. I mean, pah! Stop bothering me with nonsense and let me get on with providing the comic relief.

Not to worry. I'm sure Canon Pennefather, who really does seem to be drinking more than the average clergyman, can sort this terrible mess out. Just a moment, aren’t you Kate O’Mara?

I’m having another gin fizz.

Murder on the Nile is at the New Wimbledon Theatre, The Broadway, London SW19 1QG until Saturday 7th April. To book click here.