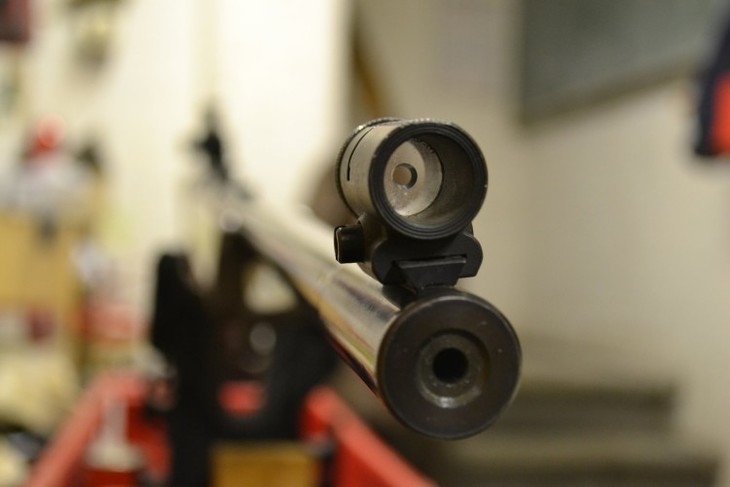 Unlike the Olympic shooting venue at the Royal Artillery Barracks, Woolwich, the presence of shooting sports in London is relatively discreet. However,with over 65,000 legally held firearms in London, and over 1,800,000 in England and Wales overall, it's a sport that is not only enjoyed by many, but at which the UK has a history of excelling. Indeed, Great Britain is in the top five most successful countries of all time for this Olympic discipline.

In the 2012 Olympics, 15 individual gold medals will be up for grabs and, although shooting is equally accessible to men and women, the present configuration of events means that more than half of these will be awarded in the men's categories. That aside, the GB Olympic hopefuls are already in fine fettle, with Peter Wilson winning - and smashing the world record for - the Double Trap at the ISSF Shotgun World Cup in Tucson, and the ISSF World Cup here in London looking set to be a hot contest. For more information on this event, which starts on 17th April and is part of the 'London Prepares' series - at which GB's short-listed candidates will have to put in a good performance if they want to be selected on May 2nd - click here.  (Sadly no public tickets are available.)

12 further medals will be available for the Paralympic shooting events (30th August - 6th September) which are split into women's, men's and mixed categories, with further distinctions being made between athletes who can support the weight of their firearm themselves (SH1), and those who use a shooting stand to support their arm (SH2).

All the shooting events - explained below - are varied, but the athleticism and discipline that go into each do not. As 2012 hopeful Rory Warlow puts it, "shooting teaches a lot of values that are handy in any walk of life, such as discipline, responsibility and respect. Shooting is a fun, safe and very friendly sport that anyone of any size, gender or age can learn and enjoy." Londoners have a variety of convenient opportunities to try most of styles of shooting; see the relevant categories for details.  Unlike many sports, you can learn (and become Olympic-standard) at any age: the oldest competitor and medallist at the Games was a Swede called Oscar Swahn, who won a gold aged 64 in 1912 and a silver aged 72 in 1920.

Broadly speaking, the Olympic events will be based around 3 different types of weapon: pistols, rifles and shotguns, with the aim in each being to achieve the highest score.  Individual events vary on factors such as the type of target and distance to it, the time allowed and the number of shots necessary.

Pistol shooting is essentially prohibited in England, meaning that even our Olympic hopefuls have had to train abroad, and a special temporary exemption has been put in place to ensure that the 2012 contest can go ahead. If you'd like to try air pistol or rifle in London, however, check out the Phoenix Club in New Cross.

The pistol events are:

All of these events involve shooting at a paper or electronic target with ten scoring rings, the most points going to those that hit the bull's eye. The number of shots and the time allowed varies between contests, but all shots have to be taken from a standing position, with the pistol held in one hand only.

8 shooters progress through to each final, in which the score zones are divided into 10ths; meaning that the best shot scores a maximum of 10.9 points. The score from this round is then added to the competitors’ previous scores in order to obtain the final rankings. For more information on individual events, click here.

For the air pistol events competitors shoot with .177-calibre pistols powered by air or carbon dioxide, for all others .22 calibre pistols, such as these, are used.

As with the pistol discipline, rifle events are split between air and small-bore weapons, the latter being .22-caliber (5.6 mm) single-shot rifles like these.  If you’d like to try rifle shooting for yourself (either small or full bore), check out the London Stock Exchange Rifle Club or the London Practical Shooting Club.

The rifle events are:

The scoring in the rifle events is similar to the pistol. For 'prone' shooting, the shooter will lie on his front, and for three positions the athletes switch between prone, kneeling and standing positions.

Full bore shooting (using larger calibres over a bigger distance) used to feature in the Olympics and is just one of many now discontinued shooting disciplines (although it still features in the Commonwealth games). Another culled event was duelling pistol (1906), at which competitors had to shoot at man-shaped targets dressed in frock coats! (Human-shaped targets are also now banned.)

Rather than paper targets, shotgun shooters aim to hit clay pigeons, which are not actually related to our friendly flying rats (the first and last time they were shot in the Olympics was 1900) but saucer-shaped targets propelled from sprung machines called 'traps'. Rather than a solid projectile, the cartridges they fire through their shotguns (usually over-and-under models like this ) contain small lead balls, which separate on leaving the barrel.  If you’d like to give clay shooting a go, there are many great venues on the periphery of London such as JJ’s, the West London Shooting School and the West London Sporting Targets.

The shotgun events are:

Broadly speaking, the shotgun events all involve shooters firing at clay targets from a variety of stands (firing positions) ranged around the traps, from which the clays are released upon the shooter shouting ‘pull’, harking back to the days when live birds were released from traps by pulling on a string.

Follow the links for more information about trap and double trap, or read below to find out more about Olympic Skeet from Rory Warlow, who has already notched up a string of medals at the Commonwealth Games and is on the GB team 2012 shortlist.

What made you start shooting?

My dad and grandad participated competitively in shotgun shooting for many years and typically I wanted to have a go, so I went along one day and really enjoyed it. I started when I was 12 years old under my dad's supervision and I was kind of hooked from then on really.

What style of shooting do you do?

I shoot Olympic skeet, as the name suggests it is one of the three shotgun shooting events held at the Olympic games. Skeet has been part of the Olympic programmes since 1968. It's a fairly simple discipline to explain. Basically there are two towers containing clay target machines facing each other about 40 metres apart and competitors shoot from 8 different set positions. These positions are arranged in a semi-circle fashion around the towers. A round is made up of 25 targets and a full international competition consists of 5 rounds of 25 plus a final of 25 for the top 6 competitors.

What sets it apart from the other types?

Skeet is different in the fact you are not allowed to have your gun in your shoulder until the target is released from the machine. Your gun must be on your hip until you can see the target, then you can mount the gun into your shoulder and shoot the target. All other clay Olympic clay target disciplines are allowed to shoot with a pre-mounted gun. Also skeet has a random delay of up to 3 seconds from when you call for the target to be released and when it is actually released.

Well I do physical exercise 4-5 days a week for roughly two hours a session depending on what I'm doing. That mainly consists of running, cycling and lifting weights. In my sport we work a lot on core strength as it is essential in maintaining stability when shooting. I would like to do more but as in any sports training the risk of injury is a lot higher if you overdo it.

As far a shooting training goes I shoot 2-3 days a week and usually shoot 200 shots in a day. This requires a lot of concentration, after a days shooting I usually fall asleep as soon as I get home as it's so mentally exhausting.

How do you prepare for a competition?

I just do everything as normal, I keep to my training and routine and try not to think very much about the forthcoming competition until I'm there and in that environment. It's no good working yourself up and getting nervous before you're even there! Also sticking to what you know helps focus you away from any negative thoughts you don't want creeping into your mind before a competition.

How do you feel about the forthcoming ISSF World Cup?

I feel very excited, it will be great to compete on the ranges that will be used in the Olympics and get a feel for them. Also it's rare that we have an ISSF World Cup in the UK, so I am looking forward to shooting on home soil for a change. Usually we are halfway around the world so it makes it difficult for friends/family to come and support, thankfully in London we won't have that problem.

To keep up to date with Rory's progress, visit http://rorywarlow.com/.

We’re bringing you the Londonist lowdown on all Olympic and Paralympic sports in the run up to London 2012.