Occupy's Next Destination: The Tube 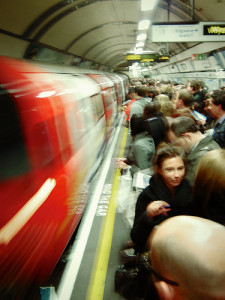 Occupy London has unveiled details of a series of events for May 1st, including a plan to occupy the Underground.

As May Day is a day for all workers, Occupy supporters are planning ‘Occupy the tube’, a fun and inspiring event starting on Tuesday morning in the centre of the City of London. All will be revealed that morning but look out for white flowers.

Given that a trip during rush hour is rarely "fun" or "inspiring", you might also try looking out for Occupiers sporting bloody noses after tempers boil over. Details are scarce at the moment, but people are urged to convene at 7am in Finsbury Square or at 8am in Liverpool Street.

Later in the day, the group will convene at Paternoster Square for a May Day march to Trafalgar Square.

Occupy are describing the occasion as "open to everyone including — and especially — those who have followed Occupy over the last seven months but have never felt able to participate in any direct way". They might have chosen an activity less likely to annoy potential recruits.