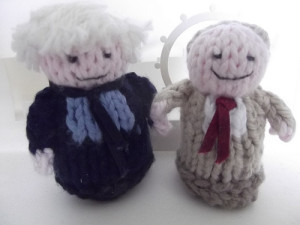 In the latest development of the London mayoral candidate tax row, all four candidates have agreed to publish all their earnings and taxes paid in the last four years.

Lest we forget, it all started when Andrew Gilligan of the Telegraph, a journalist not known for his warm feelings towards the former mayor, published an exposé denouncing Ken Livingstone for what he described as tax avoidance. Tory blogger Paul Staines as Guido Fawkes picked up the baton and published frequent criticism of Livingstone, culminating in a chicken-based video stunt (presumably an allusion to Boris Johnson's now-notorious description of his Telegraph column salary as 'chicken feed') at a mayoral campaign event, though a video posted by London political blogger Adam Bienkov which shows Staines (see comments) bumping into and eliciting sharp comments from a camerawoman and calling a Labour staffer a cunt rather diminishes it.

Ken Livingstone has repeatedly denied avoiding tax and, for a short while, it looked as though it might all blow over, with only the occasional dig from his fellow candidates. Fast forward to Tuesday where Livingstone and Johnson clashed over the issue on air during an LBC radio debate when Livingstone said that Johnson had the same tax arrangements with his own company, Finland Station, which Johnson hotly disputed. Johnson allegedly faced his rival down in a lift afterwards and repeatedly called him 'a fucking liar'.

The bone of contention is that Livingstone apparently had his earnings paid into his company, Silveta Ltd, meaning he paid corporation tax at 20% rather than income tax at 50%, though he says he paid income tax on the money he takes as salary. Liberal blogger Tim Fenton called Gilligan's story 'a disgrace' and went on to explain that Livingstone's tax arrangements are commonplace and perfectly legal. The legalities of it aren't necessarily under debate, but the unfortunate aspect of this saga is that Livingstone has previously been vocal in criticising people for tax avoidance, which has led to accusations of hypocrisy on the part of the former mayor.

The suggestion that all candidates should publish their tax details came from Jenny Jones, and the Guardian notes that until now, Johnson has been reluctant to disclose his financial affairs. Today, Ken Livingstone stated that he will only publish if the other candidates make the same disclosure:

"I will lodge the details for the last four years with an independent body or individual, to be published simultaneously when all four main candidates have provided them. I will set out income to my company over the last four years, how much my wife and I received and how much tax was paid. Full household income and tax must be released by all candidates because the question of the overall household income and tax has continuously been the subject. This fully meets the terms agreed on Newsnight."

Both Johnson and Paddick have now followed Livingstone's example and published their tax arrangements while Jenny Jones' are expected early next week.

Livingstone has also called for an end to the increasingly bad-tempered and negative campaigning on both sides.

Any accountants reading? Can you shed any further light on the mayoral tax debate?

Photo by Matt from London in the Londonist Flickr pool