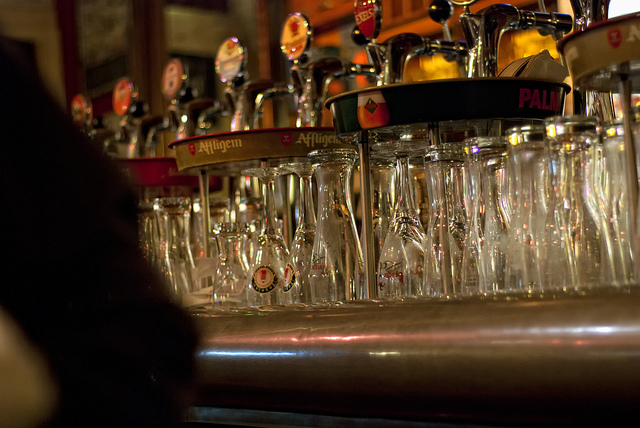 Forget fools, showers and chocolate eggs, this April is also ‘community pubs month’, a CAMRA initiative aimed at getting more people into their local pub and keeping these vital community institutions open. Over 330 London pubs are taking part and you can find your local events here. A selection of these, and other festivals is below, but if we’ve missed any please let us know in the comments.

The Victory Club, South Norwood. Open 11am-11pm on Friday and Saturday, as well as 12-4pm on Sunday, the festival presents nine ales and a cider alongside family-orientated events.

The Fox, Hanwell. 20 beers from all over the UK, as well as ciders, will be available at the Spring resurrection of their biannual beer festival. A hog roast will also be available on Good Friday.

Brodies Bunny Basher, King William IV, Leyton. 40 Brodies beers, including some brewed in collaboration with stalwarts like Mikkeller and the Kernel, will be available for £1.99 a pint from 11am till late. Check out the list here.

The White Horse, Parsons Green. Over 50 beers, showcasing the best of hoppy beer styles, will be available at their ‘Over The Hop’ festival. Special festival events include blues music from Steve Morrison on Sunday evening and a six-course beer & canapé tasting with Melissa Cole on Tuesday. Don't miss the BBQ if the sun shines!

Hoopers, Dulwich. The 'London and Home Counties' beer festival offers a selection of new local brews, as well as old favourites and brews not currently sold in London.

Bexley Beer Festival, Sidcup. Over 65 real ales will be available at the Sidcup Rugby Club from 5-11pm on Thursday and 11am-11pm on Friday and Saturday. Hot and cold snacks, ciders and traditional games will also be on offer, and general admission is £2.50 for the general public, or £1.50 for CAMRA members (who also get in free on Friday before 5pm). To see the beer list, click here.

The Three Compasses, Hornsey. Their ‘Right Royal Beer Festival’, brings a range of royal-themed UK cask ales for a Jubilee celebration. Food,  including Sunday roasts, will also be available.

The Strongroom, Shoreditch. The prize for latest-opening beer festival goes to this Shoreditch bar, which continues until 2am on both Friday and Saturday. More importantly, it features over 20 London-made brews, locally sourced food and live music. Entry is free and further details, including opening times, are on their website.

The Willoughby Arms, Kingston. Over 40 ales and ciders are on offer at this St George’s Day festival, as well as an ale trail, Sunday quiz, live music and more. The pub is open until 12pm every day.

Hook Beer Festival, Surbiton. Beer gives you wings, or rather rotors, at this festival in support of London’s Air Ambulance. Food will be available alongside a varied beer selection from around the UK, although it’s strictly over 18s only. The festival is open from 6pm-10pm on Friday, as well as both 12-4pm and 6-10pm on Saturday. Entry, including a festival glass and programme, is £5 and you can book in advance here.

The Chippenham Hotel, Maida Hill. Up to 12 real ales and ciders will be available from 4pm-11pm during their St George’s beer festival.

By The Horns Brewery, Wandsworth. The brewery will be launching its new 6x6 Oat Pale Ale (made with six hops and six malts)  between 11am and 7pm. You’ll also be able to purchase a selection of their other (very London-themed) brews, as well as BBQ food and snacks from the Earlsfield Deli.

Waltham Forest Sports and Social Club, Walthamstow. Celebrating the beers of Sheffield and Derbyshire, their 8th beer festival features 25 ales, ciders and perries, food and live music on Friday and Saturday nights. Open from 12pm every day (closing 11pm Thurs, 12pm Fri/Sat and 5pm Sunday), social club and CAMRA members can get in free, otherwise entry is £1 before 8pm and £3 thereafter.

For more pubbish ideas, get Londonist's Book of London Pub Crawls for less than the cost of a pint.