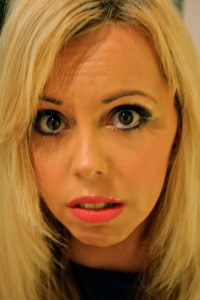 A couple broke up in the Soho Theatre Bar last night. If you're wondering: it seems like a nice place to break up, actually. They've sort of refitted it lately with red vinyl seats and little diner-like seats and tables with candles in glasses, which you then lean over pleadingly and then storm angrily away from while some monster of a comedy reviewer watches from afar and takes pictures. Gosh, it was so heartbreaking.

Now, you cannot exactly blame a comedian for scheduling, but the reason we were watching this mini-soap opera unfold was because the Roisin Conaty show started at 9:30PM. To reiterate: 9:30PM. It gave us time to grab food and watch a little football and grab drinks and watch a relationship crumble into dust, but after all that we were expecting something a little meatier for the main event.

Conaty's previous tour, Hero, Warrior, Fireman, Liar, was great, a story of how Conaty's old school had bafflingly asked her to make a motivational speech to the impressionable minds there despite her life being terrible and her living with her nan, intersected with matey laughs. Unfortunately, where H/W/F/L thrived around a central story and theme, Destiny's Dickhead (the show is called Destiny's Dickhead) floundered without one.

Now, now: let's not get into the whole 'do comedians need to have a central line or thread to their show to make it any good' argument – that is neither here nor there. But they do, they definitely do, and without one Destiny's Dickhead felt like an awful lot of lead up without any real end product. A lot of those 'settle down before I get to the main bit' jokes, and then no actual main bit jokes. Kind of like going to a restaurant and just ordering a prawn cocktail.

What have we learned, then, here? We have learned this: (i) that the Soho Theatre seriously needs to think about paying a couple to break up there every night, as a sort of performance art piece in the least, because seriously it was amazing and (ii) well, Roisin Conaty is a loveable on-stage presence and chucklesome storyteller; Destiny's Dickhead, sadly, doesn't play to her strengths, and falls a little short as a result.