Boris Attacks Ken Over Sultan’s Elephant, Which He Said Was Brilliant

By jamesup Last edited 113 months ago
jamesup Boris Attacks Ken Over Sultan’s Elephant, Which He Said Was Brilliant

Today’s Times (paywall, p.17 of the dead tree edition) reports that Mr Johnson has condemned Mr Livingstone for “‘squandering’ money on ‘harebrained schemes’”, using information obtained under FOI from the Livingstone years. The Mayor singles out the 2006 performance art piece ‘The Sultan’s Elephant’ — which received a grant of £33,000 — for criticism.

The Times reports: “Mr Johnson said that his office had smashed the culture of waste and profligacy of the previous administration, which included ‘harebrained schemes like £33,000 on an elephant parade’.”

Be in no doubt, The Sultan’s Elephant was awesome, and £33,000 is 0.4 pence per Londoner — we think it might be one of the best value bits of public art the city ever saw. But that’s just our opinion. What did Boris think of it?

We suppose when he used it as the front cover of his Culture Strategy three years ago, that was because he didn’t like it, and wanted to draw attention to bad examples of public waste? 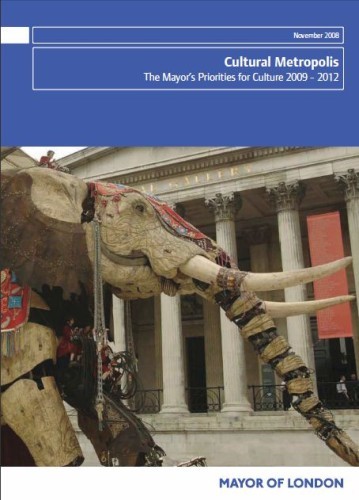 And, we guess, he was criticising it when he told the company that brought it to London that:

"...Artichoke have been responsible for some of the most astonishing and talked about events of the last few years. Artichoke exemplifies Britain's creativity and ability to shock, surprise and tantalise."  Boris Johnson, Mayor of London

And, just to be clear, he really thought it was terrible:

“Who can forget the brilliance of the Sultan's Elephant – it seemed to weave a magical spell as it brought central London to a standstill, as thousands of strangers came together, bewitched by its slow parade”.  Boris Johnson, Mayor of London

Boris — as you know from your Cable Car, Bus, and Cycle Schemes, all of which you said would cost us nothing, all of which have cost us considerably more than £33,000 (around 200 times that actually) — awesome things don't come cheap. So lay off the elephant; if given the chance we'd give it our vote.