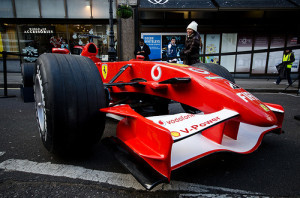 A demonstration against the controversial Bahrain Grand Prix took place yesterday at the London offices of Formula One's promotion company.

Human rights campaigners gathered outside the Knightsbridge offices of promoter Formula One Management. They called for the race to be cancelled after a series of clashes in Bahrain between protesters and security forces. On Saturday, the body of a man was found after a group of protesters were allegedly attacked and beaten.

"I would appeal to Lewis Hamilton and Jenson Button to withdraw from the Bahrain Grand Prix. By participating, they'll be giving respectability to the regime. There can be no normal sporting relations with an abnormal regime that is killing its own people."

"I spoke to the Foreign Minister of Bahrain today to express our concern about the violence in Bahrain, to call for restraint in dealing with protests including during the Formula One race and to urge further progress in implementing political reforms. The British Government supports the reforms already underway in Bahrain and we want to help promote that reform."

Stern words there. Meanwhile, the Bahraini government is 'confident' that the race will go ahead and will not be disrupted, employing the use of vast numbers of police and tear gas to keep protesters at bay. A number of journalists have been denied entry to Bahrain ahead of the race in what appears to be an attempt to suppress non-F1 related news coverage.

The Grand Prix is due to start at 1pm today.

Photo by Kris Doubleyou in the Londonist Flickr pool.