A Tour Of The Seven Noses Of Soho

We all know Soho. At least, we all think that we know Soho. But have you ever taken time to look at it close-up? And have you heard the legend that if you spot all seven noses in Soho, you'll attain infinite wealth?

We sent Londonista Sandra on the Seven Noses of Soho walk with Westminster guide Pete Berthoud — he of the early Christmas Day morning tour — in a bid to bolster her bank balance and learn a thing or two about this infamous, ever-evolving entertainment district. Here's how she got on. 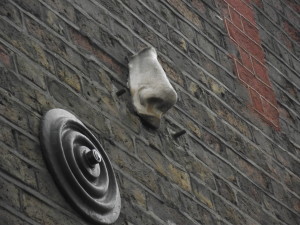 In 1996, artist Rick Buckley appended a set of sculpted noses to a number of buildings round central London. They remain to this day, confounding anyone who stumbles across one. Some of the noses are easy to spot, others are so well camouflaged that few people ever see them, even though they pass by every day.

Our tour begins at Covent Garden station and, over the course of two hours, wanders round Soho and finishes in Trafalgar Square. We ended up with a totally different perspective on London, not entirely dominated by noses.

In the search to discover all seven (oh, and the extra eighth...), we are also led to a little-known green patch, where we find some sculptured fingers as well.

There's plenty of street art to see, and much social and cultural history to learn. We pass Paul McCartney's office, London's largest letterbox, the oldest coffee bar in London, the site of the first ever demonstration of TV, Mozart's old house.

This is a walk that reveals secrets hiding in plain view. It is a walk that makes you pay closer attention to the city, whether you're a newbie or a Londoner through and through. Pete is a wonderful guide and there's not a question he won't or can't answer.

If you want to know the history of the noses you can read about them on Pete's website. If you want to be guided to their locations, you'll have to go on the walk.

Pete runs regular tours of the Seven Noses of Soho, among others. Find out more at Discovering London. £8 special rate for "nice and interesting people".