A Modest Proposal To Improve Crossrail

We recently became aware of the Daily Mail Science Correspondent’s concern that Crossrail, the £14 billion rail project, was on the wrong track. Having reviewed Michael Hanlon's observations we were moved to action.

But first, to review Mr Hanlon’s important observations: the elephant in the room, he suggests, is connectivity — it's startling to see that no one has thought about this, not one person, even as the diggers hit the ground!

Firstly, Crossrail doesn't go to Heathrow Terminal 5! The new, flagship terminal! How on Earth will people get from Terminal 5 to London!

Secondly, Crossrail doesn’t go from Heathrow to Reading! An oversight surely? How else to get to Berkshire’s county town?! Heathrow’s on a spur, you see, so you need a westerly line...

Thirdly, this line doesn’t go to St Pancras! Unfathomable! If you just flew in from Paris, and want to get a train to Brussels, you’d have to change trains! How they think people will do this we just don’t know. Hanlon notes, “No one but the clinically insane would plan to spend £16bn tunnelling across north London and not provide a link to Britain’s only international high-speed rail link, right?” For some reason it goes along ‘Oxford Street’ stopping at rural halts like ‘Bond Street’ and ‘Tottenham Court Road’ rather than serving the core of the city, at St Pancras.

Fourthly, Crossrail does not link up with Euston either! The future home of High Speed 2 — why choose to go through the middle of the city when you could go to then-unplanned railway stations on the northern edge?!

Hanlon hit’s the head on the nail when he spots that “Crossrail does not really do anything that the Central Line plus the Heathrow Express does not.” We all know the Central line is pretty underused, the slackers only run the trains every 120 seconds or so, and they really do crawl along. The scheme as-it-is will be an unused failure if something is not done...

We therefore propose a few modest changes to the existing plan (see Figure 1, below) to build a Crossrail that we can be proud of: 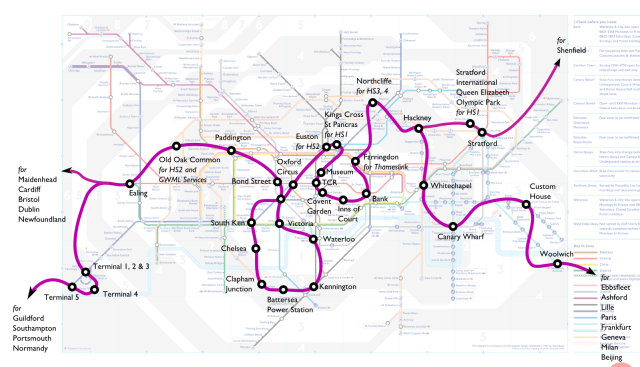 First, we add Heathrow Terminal 5 via a new tunnel, with onward connections to the South West and France via ferry (Mon-Fri, supplements apply). Moving east, the line stops at the HS2 station at Old Oak Common before continuing to Bond Street, where it diverts south to Green Park (for Buckingham Palace is also omitted, in the Jubilee year no less!) and to South Ken (Tourists, the museums, you see) and then to Chelsea (no tube station there at all! Can't leave that out!) While we’re south we circle by Battersea Power Station (where new links are needed to assist the redevelopment) before relieving the overcrowded Northern Line with an interchange at Kennington.

Waterloo is very strained, and a key station for reaching Surrey, so is our next stop. Then, on to Victoria to take the strain off the Victoria Line. We then head back to Green Park (Duh! It’s the DIAMOND JUBILEE!) before stopping by Oxford Circus (the constrained site will require some demolition).

Then north to Euston, for that important HS2 link, with another stop 150 meters later for St Pancras (HS1 for Paris). A hard right then takes us south to the British Museum (it used to have a station of its own, and deserves one now), before getting back on track to Tottenham Court Road. Covent Garden is a tourist must-see and the lifts are a pain, so that gets a stop, before we recognize the importance of our legal sector with a new station at Lincoln's Inn.

Then on to Bank — heart of The City — and north west to Farringdon for interchange to Thameslink (could be omitted, who goes to Faringdon? No one we know). A bold new station, Northcliffe International, is then built on the former site of Highbury Fields. This is to provide connections with as yet unimagined railway lines, airports, hovercraft services and Virgin Galactic operations.

Then to Hackney, so long without a Tube station — justice for the North East at last — before we split: one branch heading to Stratford (and Stratford International — it’s a long walk), and then Shenfield as planned. Our south-eastern branch calls at Canary Wharf, Custom House and Woolwich, before joining HS1 to serve a range of European capitals (trolley service will check passports) as well as popular skiing destinations (in season).

This small additional investment now will be welcomed by all Londoners in years to come. Some journey times will be a touch longer, but without changing trains there really isn’t a better way of doing it...