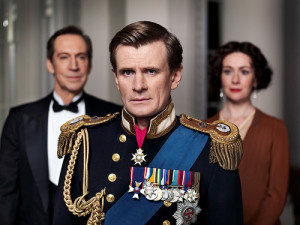 Before The King's Speech was an award-winning film with Colin Firth and Helena Costume-Drama, it was written as a play.

Now author David Seidler's script has been returned to its original, reinstating a little more backstory for some of the characters. Fans of the (we thought) superb film shouldn't fear, however; there's very little that's different in the play to worry about.

On stage, we have Charles Edwards in Firth's place as the stammering Bertie, royal down to his weak r's, a step away from any serious role in what he calls "The Firm". His wife, Elizabeth (Emma Fielding), enlists the help of maverick speech therapist Lionel Logue, played by Jonathan Hyde with a happily non-annoying Aussie accent. In many ways, it's a classic King and Commoner story, full of breaking protocols and "speaking truth to power". Just like The King and I and Mrs Brown. And, of course, a fair chunk of Shakespeare’s canon.

Just like our stuttering hero, the play starts jerkily, with lots of disjointed, bitty scenes. If there is a difference in the stage version, it's that the Prince's discomfort in public speaking is all the more powerful when it's happening live, in front of you. As Bertie's relationship with Lionel develops, so the play settles; there's a nice moment when Bertie inadvertently sits on one of his therapist's model planes, and they fix it together, with Bertie opening up about his early life. Edwards's Bertie is brittler and more childlike than Firth’s, making his revelations about cruelty in such a privileged childhood all the more shocking.

The second act gains more momentum, as the abdication crisis and subsequent coronation of Bertie as George VI brings out the best (and worst) in characters like Winston Churchill and the Archbishop of Canterbury. Discussions about politics, the separation of church and state, and the threat of the Nazis inject the play with more tension than may have been felt in the film; but we rather wished Michael Feast’s pompous Archbishop was slightly less broadly drawn. (But he did get the laughs.)

Anthony Ward's revolving set with a clever sometimes-opaque, sometimes-transparent partition heightens the feeling that these characters are constantly on display, being watched or overheard. Adrian Noble directs with a deft touch. But for all its elegance and stiffly executed wit, this is a terribly safe play. It’s interesting because of the closeness to our own Queen and her unshakeable sense of duty, particularly if you’re wondering what all the fuss is about in this Diamond Jubilee year. But even if the Elgar-drenched finale tugged at our heart-strings, we can’t then put our hand in the same place and say this play adds much to the already brilliant film.