Reprieve For Camberwell Orchard As Council Backs Down Over Library 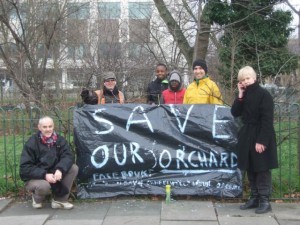 A campaign group set up to save the Camberwell Green Orchard from being bulldozed had reason to celebrate this week when Southwark Council backed down over plans to build a new library on the open space and said it would consider other options.

The orchard, which is situated between Camberwell Green and the magistrates' court piazza, contains about 20 apple, fig, pear, crab-apple and cherry trees, hazelnut bushes and blackberries. It  was planted in the mid-nineties by a charity to encourage local food production and is now a mature green urban space.

Donnachadh McCarthy is one of the campaign's organisers and was part of a delegation, supported by the local Friends of the Earth campaign, that attended the council meeting on Tuesday night. After months of campaigning and facing obfuscation and lack of consultation, he was "gobsmacked" by the council's response. Instead of the scheduled announcement that the new build would go ahead, councillors listened to the campaigners, promised a full local consultation and agreed to look into alternative sites for the library that would use existing built areas, such as the parking lot next to the leisure centre.

Could this change of heart have anything to do with the fact that this is the same week that the council has published its Open Space Strategy document, recognising the importance of open spaces to the health of communities – with Camberwell designated as an area that falls below the borough's standard for access to parks and green spaces?

But it may be only a temporary reprieve. As Donnachadh says, the orchard represents "a precious amenity in a very densely populated area which is only going to worsen in the new few years as the population rises by an estimated 20% – so it's really important we protect our open spaces". You can sign a petition to defend the orchard.