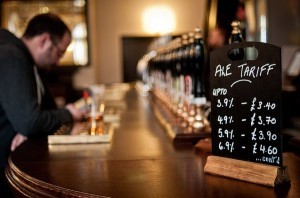 London's beer festival scene is blossoming. For sheer atmosphere and beer variety both the London Drinker and the Wandsworth Common festivals are well worth a look, but if you're seeking an intensive overview of London-brewed beers then newcomer the Sebright Arms is this month's place to be.

Leyton Orient Supporters’ Club, Leyton. The 14th Piglet beer festival runs from 5-11pm on Friday and Saturday and promises a range of ales and ciders – check out the list.

The Rake, Borough Market. Their fourth annual Welsh Beer Festival brings 26 casks from 14 Welsh breweries to this popular pub, which is open from 12-11pm every day. A great way to celebrate St David’s day, as long as you’re not still sore about the rugby...

The Grape & Grain, Crystal Palace. Over 60 ales and ciders will be on offer, alongside a range of food from the BBQ pit and live music from the likes of the Sax Pastilles and Janet Penfold. A discount is available to CAMRA members.

Cask, Pimlico. Their 'Meet The Brewer' series continues with a talk and Q&A from Cumbrian brewery Hardknott, whose full range of beers will be available from 5pm until closing.

London Drinker Festival, Camden. 10 London breweries are represented, alongside some of the best ales from the rest of the UK, a range of ciders and a wide variety of foreign bottled beer. The predictably packed event will run from 12-3pm and 5-10.30pm on Wednesday and Thursday, plus 12-10.30pm on Friday. It also offers a selection of food and the usual CAMRA stalls and games.

Sebright Arms, Bethnal Green. The pub’s first Real Ale & Rockin’ Blues Festival will feature over 20 barrels of London craft ale and music from Gaz Mayall of Gaz’s Rockin’ Blues. Most of the London breweries will be represented and the range will include sneak previews of some as-yet-not-launched brews. Beers are £2.50 as long as stocks last and food comes from renowned residents Lucky Chip.

White Horse, Parson's Green. Not so much a festival as a fight for survival, tonight's event is 'Wine vs Beer', an epic contest between the two beverages to determine which can be best matched with food. The evening commences at 7pm and tickets are £30, with all the proceeds going to the local charity.

The Bar, Gants Hill. Their Spring Real Ale Festival will mainly feature brews from Thornbridge, Dark Star and Mighty Oak. More information isn't readily available, but the pub is highly rated by CAMRA so they should know their way around a barrel.

Wandsworth Common Beer Festival, Le Gothique. (Nearest rail station: Wandsworth Town.) 100 new or hard to find beers await you in the deliciously atmospheric Royal Victoria Patriotic Building, alongside previous festival favourites, a selection of food and music on Friday and Saturday night. New for this year is a preview night on 28 March, giving you entry, a festival glass and as much beer as you can drink for £25.

Photo by Robbie Ewing from the Londonist Flickr pool