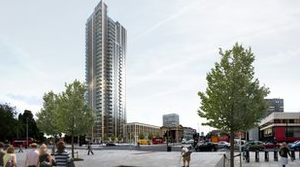 After last month's unveiling of the ‘master plan’ for the Heygate Estate regeneration, the residents of Elephant and Castle have been offered a further insight into plans for the entire area.

Yesterday architects Squire & Partners revealed their plans for the central concourse of Elephant and Castle at an exhibition in the area. These plans include a high-rise tower extending between 32 and 37 stories and a leisure centre consisting of a swimming pool, badminton courts and a gym.

The development will not be offering any ‘affordable housing’ in what a spokesman for Southwark Council described as ‘an exception to normal policy’, but the council has assured residents that the 35% affordable housing target for the regeneration will be met by completion in the late 2020s. There is concern however among local community groups about the inconsistencies in Southwark’s assurances. In 2006 the Official Southwark Council Regeneration Magazine stated:

“The Council asks that all new residential schemes have a 35% affordable provision, and in premium sites- such as Elephant and Castle-that figure rises to at least 40%”

Many concerns have been raised over the number of legitimately ‘affordable’ units in the regeneration. The official definition of the word ‘affordable’ was recently altered, effectively raising rents in affected housing by up to 300%. This, however, is the first time in this regeneration programme that a development has entirely forgone its obligation to provide low-income housing. Southwark Council insist it is necessary in order to provide the funding needed for the extensive leisure complex detailed in the plans.

Photo by Squire and Partners.