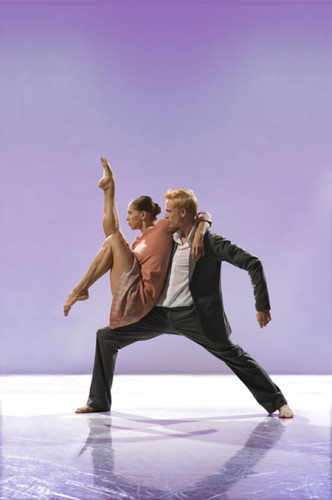 Since its inception in 1959, Nederlands Dans Theater has been known for the jaw-dropping virtuosity of its dancers. NDT2, the company's younger ensemble for dancers aged 17 to 23, is populated by the cream of the world's dance conservatoires, as feted and revered as many main casts; this touring repertory programme showcases both the technical prowess of the dancers and the artistic strengths of the creative team.

Following a tumultuous couple of years marked by funding threats and personnel changes, the company returns to the UK with new talent at the top: newly-appointed Artistic Director Paul Lightfoot and house choreographer Alexander Ekman are both represented in this triple bill. Lightfoot’s opening piece, Passe-Partout (2009) is heavy on the portentous symbolism – dancers pass through a series of enormous doors which seem to physically play on the dual meaning of passe-partout as both “pass-key” and “frame”. The doors themselves are as much a part of the choreography as the exquisite variations performed by the cast; pushed from side to side they reveal new frames of action, previously unseen dancers popping up in the shifting openings. The movement style is very NDT – lots of neoclassical extensions tempered with tricky little heel-twists, rapidly contracting torsos and high-flying doublework. In a strong cast of six, the sublimely supple Marne van Opstal stands out for his detailed interpretation.

Flanked by the newcomers is an award-winning piece from Jiří Kylián, the man whose name was for three decades synonymous with the company. Gods and Dogs is dark both in tone and literally, the stage lit by a harsh streak from the bottom corner which is sometimes obscured by figures on the stage, their bodies translated into looming shades on the back cloth. If these oversized shadows are the gods, they’re certainly of the fear and trembling variety; the dogs of the piece are represented by bestial lolling and crawling, dancers sagging across the stage with torsos dangling low. A projection shows a lupine dog approaching slowly and menacingly towards us; Kylián’s 100th work (and last for the company) is a far from joyful affair, lurking in the dark and despondent reaches of the human psyche.

Closing piece Cacti, by young choreographer Alexander Ekman, couldn’t be more different in tone or style. A lighthearted ensemble, the work lampoons po-faced academic dance criticism by having a disembodied speaking voice narrate possible interpretations as the piece itself progresses. There are references (both physical and verbal) to oriental and ritual dance, with lotus fingers and tub-thumping body percussion as the whole cast of 16 operate as a “human orchestra”. The piece is exuberantly joyous – with a lovely disco boogie moment and a series of on-the-spot runs that remind us of a zoetrope in motion – and cleverly restricted, flawless unison framed by an ingenious set of moving boxes that keep the dancers in a rigid grid formation. The cacti which appear in the piece may invite speculation as to their significance (especially the tall and spiky one balanced on a male dancer’s privates), but we're not going to rise to that.