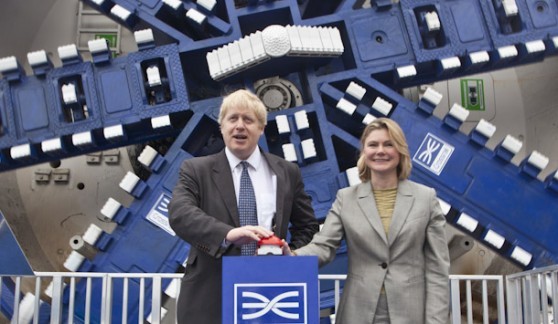 Boris Johnson, transport secretary Justine Greening and various other dignitaries decamped to Westbourne Park this morning for the official ceremony to switch on the first two tunnel boring machines (TBMs) that will spend the next few years drilling beneath the streets of London for the Crossrail project.

The first of the "voracious worms nibbling their way under London", as the Mayor described them, begins work next week, while a second will start its journey eastwards in April, reaching Farringdon in 2013 (only slightly slower than a Hammersmith & City line train in rush hour). Later that year a further two machines will be launched at Royal Docks and piloted westwards via Whitechapel and Liverpool Street before the tunnels are completed at Farringdon. Another pair will bore the tunnels for the Plumstead branch.

A naming competition, open to the public, resulted in the first two machines being christened Phyllis Pearsall, in honour of the woman credited (albeit perhaps not entirely correctly) with drafting the London A-Z map, and Ada Lovelace, who worked on Charles Babbage's early computing device. Two of the remaining three pairs of TBMs will be named Victoria & Elizabeth and Sophia & Mary. As we're talking about a pair of bores that intend to drone on, oblivious to most Londoners, for the next few years, we're surprised they didn't get named Ken and Boris.