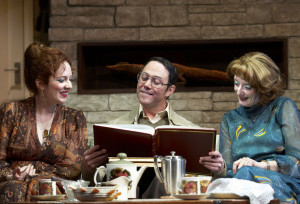 Time heals and waits for no man, and sometimes you just want to kill it. But this month it takes to the stage in Alan Ayckbourn's Absent Friends — at the Harold Pinter Theatre until 14 April — as the unseen orchestrator when six friends come together to fall apart.

This revival of Ayckbourn's 1974 comedy is so solidly of its time — thanks in part to Tom Scutt's quirkily detailed (and befittingly brown) set design — yet simultaneously timeless, as what may superficially seem merely an afternoon's tea party held with the best of friends and the best of intentions, degenerates as eternal preoccupations with sex becomes tragedy, and death becomes farce.

At times it's difficult to weigh up what's more impressive: Steffan Rhodri's spectacularly plausible English accent, or how they all manage to hold a straight face throughout (the only corpse being Carol, obviously). Katherine Parkinson is superbly comic in both timidity and tantrum modes, whilst Kara Tointon — playing the stoic, glamorous mistress — certainly looks the part... It's just that when she opens her mouth, she seems to act with all the subtlety of a fog horn. If you wanted to see "that woman from Eastenders" you're in luck, since Evelyn unfortunately seems to be played more by Dawn Swann than the actress who won such critical acclaim last year in Pygmalion.

Timing — appropriately for the Harold Pinter Theatre — is key throughout, and Elizabeth Berrington's portrayal of Marge sweeps the audience along with her resolute lack of it, making her mortification external and garnering the loudest laughs in the deathly silence.

It's flaws like these which we may try and disguise, but when juxtaposed against the aspirations and impressions of youth, we can no longer keep secret. Even if we try to keep schtum, time will tell.

Absent Friends is at the Harold Pinter Theatre, Panton Street, London SW1 until 14 April. Tickets from £15 (a bargain, really).