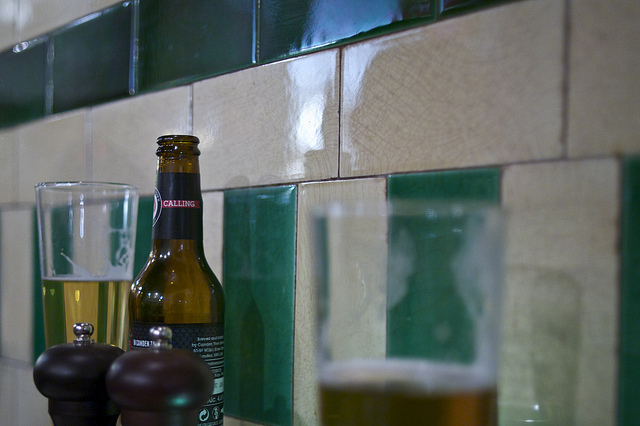 Easy does it and it's done quite well at Old Tom’s Bar, where grazing menus featuring British cheese and artisanal meat are paired with craft ale and fine wine set a tasty tone for casual lunches and snack-y meetings in a cosy and historic spot.

The bar is named after one of Leadenhall Market's most celebrated characters from the 18th century, Old Tom. Old Tom was a goose who managed to escape slaughter and went on to become a sort of mascot for the market and to be beloved by all the vendors. After his death in 1835 at the age of 38, he lay in state in the market and was buried where this bar named in his honour is today. Charming stuff.

Adding to the bar's charm is its double down below location. Sheltered beneath Leadenhall Market's impressive Victorian cover and accessed via a winding staircase under the Lamb Tavern,Tom's has a bit of “man-cave” atmo to it with original butcher tiles contrasting with vintage wooden furniture and worn leather armchairs. But foodie females shouldn't worry too much. It's very much a den to be sure, but minus any stodge.

If you're keen to sample a connoisseur's range of farmhouse cheeses and charcuterie, Tom's is well worth a visit. There's a variety of cheese and meat boards, priced at £5.50 each. Vintage Cheddar, Shropshire blue are a couple of winning selections from the simple but smartly curated list of cheese boards. West Country sirloin of beef, Gressingham smoked duck breast, wild boar and venison salami suggest wisely made choices as well.

A good bet might be to go with a mixed cheese and meat board, which for £14.95 allows a combo of any three cheeses or meats. It's more than enough food to be shared between two hearty appetites and as with all the boards is served with seeded crackers, freshly baked bread, chutneys and pickles.

Thirsty? Craft London beers (Meantime, Camden Hells Lager and more), London cask ales (Young's, Sambrook's, Redemption), usual suspects like Peroni and Guinness along with a succinct wine list ensure a decent sip to accompany your sup. Beers run from £3.70 for a pint. Wines start at £3.90 for a glass, £15 for a bottle.