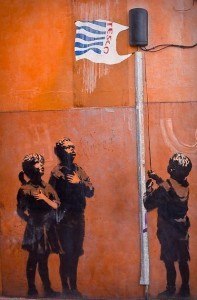 Waltham Forest Anti-Cuts Union and Youth Fight For Jobs are planning a demonstration outside Tesco in Leytonstone on Monday 20 February over government plans to force the jobless to take on unpaid work.

The Guardian highlighted the Department for Work and Pensions (DWP) work experience scheme last year — young people on Jobseeker's Allowance (JSA) are allegedly being pushed to take on unpaid work in the retail sector or risk losing their benefits.

Youth Fight For Jobs describes the scheme as 'nothing more than attempting to introduce slave-labour for the young unemployed'. Despite government claims that the work experience will make young people more employable, the fact that there is no guaranteed job at the end of the eight-week period means there is little incentive for employers to recruit paid staff under standard employment terms.

Tesco in particular has aroused their ire after the supermarket giant advertised vacancies as 'JSA plus expenses'. The company have hit back, saying that the advert was an 'IT mistake' though according to reports, said, 'the position was not permanent but offered three night shifts of valuable work experience in exchange for Job Seeker's Allowance, with a guaranteed interview at the end.' As many others pointed out, a guaranteed interview isn't the same as a guaranteed job. The Tesco advert has now been removed from the Jobcentre Plus website.

Although forcing benefits claimants to undertake work experience or risk losing their benefits is obviously a handy way to reduce unemployment figures in the short-term, its long-term viability is questionable. It doesn't take a rocket scientist to work out that two months of free labour is great for companies' profits but not so great for the job market.

The protest will take place from 6pm on 20 February with a follow-up protest at 6pm on Tuesday 21 February at Waltham Forest Town Hall. Email anti.cuts.wf@gmail.com for further information.

Photo by Benn G in the Londonist Flickr pool.