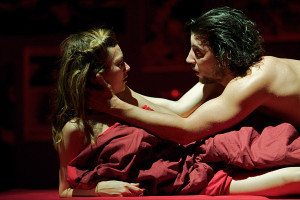 Cheek by Jowl’s new offering ‘Tis Pity She’s a Whore bristles with energy and potency, giving this Jacobean play a rush of blood to the heart.

John Ford’s scandalous play is a straight-up tale of love, betrayal and incest. Annabella has a city full of suitors but it’s her brother Giovanni who entices her into a passionate and sordid downfall. There’s murder, a marriage and moral corruption and yet Ford’s uncompromising play never judges, rather lays down the grim fate of the siblings' love affair for us to decide.

The action unravels with Annabella’s crimson bed playing centre stage, the bedroom’s red walls and vampire posters acting as a fitting match for a production which plays upon teenage lust and adult violence. Nick Ormerod’s vivid design coupled with the taut choreography gives fluidity and pace which often brushes aside the dense textual language. With the cast, nearly always ever present, racing from scene to scene, the performance comes in at a brisk two hours. It’s a clever move which, only on occasions, stifles the play’s deeper notes.

This is the challenge of the play, to lend pathos to these tragic lovers and handle the sensational and graphic violence. But Declan Donnellan's production just about has its cake and eats it, giving us the gore-fest, passion and drama whilst reaching for the emotional heart. It’s a strong ensemble cast with Jack Gordon playing a Giovanni with just the right level of pity and depravity. Lydia Wilson is a mesmerising Annabella, her asymmetrical hair matching both her teenage naivety and brazen sexuality. But it’s Laurence Spellman’s Vasques, suited, violent and snorting coke likes he’s in a Tarantino movie, who really steals the show.

‘Tis Pity She’s a Whore is another thrilling production from a company which ranks amongst the UK’s most exciting and reliable.

‘Tis Pity She’s a Whore runs at the Barbican until 10 March. Tickets from £21